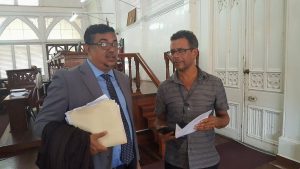 Attorney-at-Law, Glen Hanoman and his client Marcel Gaskin who is seeking a legal interpretation of Guyana’s constitution on the appointment of a Chairman of the Guyana Elections Commission.

Chief Justice, Roxane George-Wiltshire on Monday ruled against President David Granger’s interpretation of Guyana’s Constitution for the appointment of a Chairman of the Elections Commission (GECOM), saying that there is no preference for judicial persons.

She said she agreed with lawyers for the Leader of the Opposition and the Guyana Bar Association that there is no validity to arguments that the person should be a judge, former judge or person eligible to be a judge rather than merely being any other fit and proper person, and that persons from each category are equally eligible for the post. The Chief Justice said the Opposition Leader could not be be fettered to name persons from the first two categories.

Although a GECOM Chairman does not necessarily have to come from the judicial category, the Chief Justice said that person is expected to have judge-like qualities and possess integrity, honesty and impartiality. She explained that the word “any” in the other category “any other fit and proper person” widens the category and “does not restrict the qualification or profession” from which the nominee should be drawn. “There is no mandatory category and all the categories have equal weight,” she said.

Delivering her decision on city businessman Marcel Gaskin’s request for the High Court to give its interpretation of the Constitution, the Chief Justice struck down all of the arguments made by the Attorney General’s Chambers.

The President, she said, in the furtherance of democracy and good governance should give reasons for rejecting all or any of the nominees as Article  161(2) speaks to the need for dialogue and compromise, although he is not required to give reasons.  She said if the President gives reasons for rejecting the nominees, it would give him an indication of who is acceptable.

George-Wiltshire acknowledged that it is the President who ultimately decides on the name of the person to the extent of whether that person is fit and proper because he is ultimately expected to act reasonably, rationally and objectively.

On the question of acceptability of the entire list, the Chief Justice said if one of the six nominees is acceptable one would expect that the person would be appointed to the position of GECOM Chairman as there is no need for everyone on the list to be acceptable. At the same time, she said the President has the discretion to reject the entire list.

With two lists –  six names each- already having been rejected by President David Granger, Datadin said he understood from the Chief Justice’s decision that only one list could be submitted and subsequently amended its entirety. “The position appears to be- I would have to see the wording- but from what I understand it to be is that there could be one list and there could be amendments. That follows from the reasoning that if persons are unsuitable, reasons should be given or they should be identified on who are the unsuitable persons and then that would follow that you could amend the list and supply…,” he said. “The legislation and the constitution is very, very clear. One list is to be submitted and only one list should be submitted,” he said.

He said all six names could be possibly replaces but the terminology of a second and additional lists would not apply.

Practically, Datadin said the President is obliged to now state which of the six he has rejected and which he has decided to keep and select from. “Once it is six that remains, then I think a selection should follow,” he said.

The President had since late last year insisted that the preference should be for judicial persons. He then added the qualities of independence, impartiality and integrity after Opposition Leader Bharrat Jagdeo submitted a second list that had included two retired judges, one former magistrate and an attorney-at-law had been submitted.

Prior to Monday’s decision, President Granger had asked the Opposition Leader to submit a third list and if that effort fails, they should set up a high-level committee to resolve the issue.

Jagdeo last week said he has shortlisted 10 names and he would be consulting them to ascertain whether they would be willing to have their names submitted to the President.

Veterinary doctor, Steve Surujbally demitted office in February, ending 15 years of being at the helm of Guyana’s election management authority.