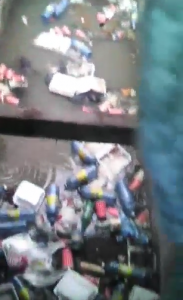 A stagnant area in the Lusignan Pasture Holding Facility.

As heavy rains continue to lash parts of Guyana’s coast, prisoners held at the walled Lusignan pasture were Monday digging drains with their bare hands to cope with pockets of flooding.

Complaints by prisoners about the poor living conditions that they are enduring came one day after the Ministry of Public Security assured that the inmates would be moved to better facilities that have been under emergency construction for about one week now.

Other sources said the inmates are refusing to leave the pasture for fear that they would lose their phones.

Several parts of the pasture where wooden pallets, being used as beds, are placed in muddy areas and encircled with litter such as plastic drink bottles.

Inmates said they have not been provided food so far for the day.

Director of Prisons, Gladwin Samuels could not immediately speak with the media until later Monday afternoon because he was extremely busy.

The Ministry of Public Security said Sunday afternoon that the asphalted and roofed area that has been constructed near the main Lusignan Prison building was expected to be handed over Monday. “Transfer of prisoners from the current open air holding area to the newly constructed holding area which has improved facilities will commence tomorrow (Monday).”

Authorities said the new facility would temporarily house approximately 450 prisoners who were transferred from the Georgetown Prison which was destroyed by fire on Sunday July 9th. 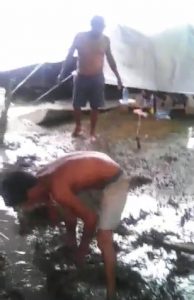 A prisoner digs a drain with his hand at the Lusignan Pasture Holding Facility during heavy rain during the morning and early afternoon of Monday, July 17, 2017.

Government said completion of the works on the new holding area was delayed as a result of persistent inclement weather in the area in recent days.

The Ministry of Public Security said works are continuing at the brick prison building at the Georgetown Prison and another area which was not destroyed by the fire.

“These two buildings will house a total of 350 prisoners at the Georgetown Prison location, further reducing the numbers of prisoners who are being held at Lusignan,” the ministry said.

To date, over 400 prisoners in total have been transferred to the New Amsterdam Prison, Mazaruni Prison and Timehri Prison.