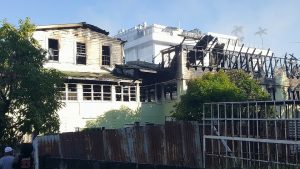 The remains of the three-story wooden building on Charlotte Street, Georgetown where Jocelyn Dow lived and several businesses were housed.

He said a probe would be conducted to determine the “point of origin” of the fire at the building located on Charlotte Street between Camp and Alexander Streets. Fire Chief Gentle said fire fighters were experiencing “minor shocks” although electricity supply to the area was switched off. 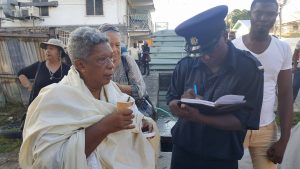 Owner of the building, Jocelyn Dow being interviewed by a fire fighter at the scene.

Dow recounted to Demerara Waves Online News the early moments of the fire. “I heard the fire alarm in the kitchen. I went outside- how strange- no smoke. I went down into the middle floor and I could see smoke coming up through the floor boards; went back upstairs to get my pets and to see what I could do,” she said. Dow said by the time she woke two other occupants and searched for her pets, the building was engulfed in toxic smoke.  “They grabbed me out of the house with the animals that I think got frightened,” she said.

Dow said she called the Guyana Fire Service on 912 and by the time she exited the building, a fire tender was outside. “They responded very quickly,” she said.

Dow could not immediately estimate the value of the building that she said was insured, but lamented that several valuable paintings have been destroyed. “The most important thing is that I have very precious old paintings, art work, all of those things,” she said.

With Dow’s Liana Cane furniture factory at Victoria Road, Plaisance having been destroyed in January, 2016, she declined to speculate whether she was being targeted. “I don’t know- the guy at the bottom- I have asked them to make sure there was nothing untoward, give what I am doing,” she said. “Who would want to burn me down?,” she said when asked whether she had any suspicions. 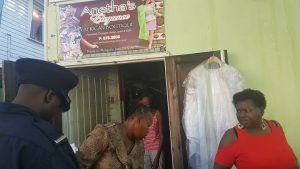 Anetha Daniels (red top) in front of her boutique.

Owner of Aretha’s Boutique, Aretha Daniels could not immediately say the extent to which the blaze affected her business, but she indicated that many of the items have been damaged by water. “I don’t know. Everything is wet. It’s all wet but there is no fire-burn in the shop,” she said, adding that she was informed about the blaze at about 6:15 AM. She managed to remove almost all of the items from the store where water was pouring from the middle flat.

Owner of Trans Caribbean Cargo International, Larry London described the impact of the fire on his business as “terrible” “We would just have to reconstruct and carry on. It’s a difficult time right now for me but we 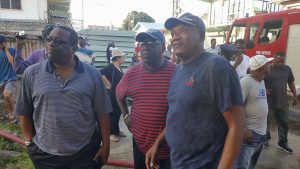 can’t just throw our hands up and give up. This is something that none of us planned for and we’ll have to reconstruct,” he said.

London said items belonging to a number of his clients have been affected by the fire, but he hoped that they would be “understanding and patient and wait for us to get our act together.”  He said some of the items were insured while others for charities were not.