Prisoners being “sanitized” of weapons, other prohibited items; inmate who attempted to escape from Lusignan shot 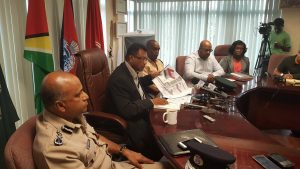 Prisoners at the Lusignan holding area have been burying weapons in the earthen area they have been occupying since last Sunday’s fire that destroyed the Georgetown Prison, but they are being searched individually before they are transferred to other jails, authorities said Thursday.

Officials, meanwhile, said the actual number of escapees is six, with four being together and the two others separate and on their own.

Public Security Minister, Khemraj Ramjattan announced at a news conference that 83 persons have been sent to Mazaruni; 90 to New Amsterdam; 48 to Timehri and 151 to the Lusignan Prison.

He said he has granted early release to 57 persons whose sentences were due to be completed in a few weeks, and magistrates have granted self-bail to 26 others while eight others have paid reduced bail.

The total number of inmates who have been removed to other prisons, granted early release and paid reduced bail is 455 persons.

The Prisons Director said a number of the prisoners at the  “very large” walled and barb wire holding facility at Lusignan have weapons in their possession.”Based on our observations- because we have persons who have a bird’s eye view of what is happening in there- they are burying some of the improvised weapons that they have in their possession so it is difficult for us to conduct those searches in an adequate way because of the resistance we are getting from them and I am quite sure it would not be a sensible thing to provoke a situation so at the appropriate time the necessary searches will be conducted and persons will be rid of all contraband that they have in their possession,” Samuels said.

He said since the relocation of the prisoners Sunday night and early Monday to Lusignan, there have been a number of fights. Victims, he said, have been treated for minor injuries at Lusignan.

An inmate, who attempted to scale the wall, was shot to his hand. “The major incident that we had there was one prisoner who was shot in his left hand after he was observed on top of the fence which caused the guards to believe that he was attempting to escape and based on our SOPs (Standard Operating Procedures), it was the appropriate point to engage,” said the Prisons Chief.

Authorities maintained Thursday that Sunday’s fire was the result of a well-orchestrated plan in which six separate fires were set at the Georgetown Prison while the six inmates bolted from the maximum security facility.

Government has ruled out the re-construction of such a large prison there, and plans to use there as a remand facility. Efforts are being made to rehabilitate the concrete structure and relocate at least 250 inmates there.