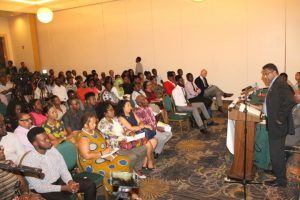 Guyana hopes to surpass Trinidad and Tobago, and Jamaica in the amount of monies it gives to youth empowerment and employment by scrapping a multi-billion dollar subsidy to the state-owned Sugar Corporation (Guysuco) and injecting more funds from oil revenues when production begins in 2020, Public Security Minister Khemraj Ramjattan says.

“This why we are making sure that the bailouts now that we are having on sugar will have to come to a halt and understand that,” he said to applause Wednesday night at a University of Guyana-organised public forum on Youth Crime and Violence.

“We will not be bailing out sugar and we have a plan for that and so there will be some more money that can go into some other sectors and rest assured that we are going to up that 0.7 percent to more. I cannot tell you how much more… No, no, no I am being realistic here. We have to be realistic. If the economy produces much more and the price of sugar gets up high, you’ll expect us challenging the other two other countries in the percentage rather than being half Jamaica and just one-third of Trinidad,” he said.

Speaking in his personal capacity, Registrar of the University of Guyana, Dr. Nigel Gravesande highlighted that Guyana’s budgetary allocation for “direct youth empowerment” is 0.7 percent compared to 1.5 percent in Trinidad and Tobago, and 2.3 percent in Jamaica. “That is the statistical reality and the most recent UNECLAC (United Nations Economic Commission for Latin America and the Caribbean) report that I have seen spoke to a direct correlation in youth violence and economic empowerment,” he said at the forum. 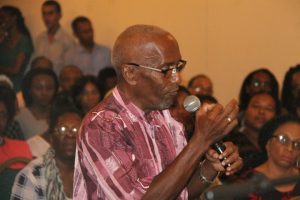 Gravesande questioned the Public Security Minister about whether there were short-term, medium-term and immediate plans to structure the economy to focus on sustainable youth empowerment through increased monies in annual national budgets.

He reiterated government’s position at a time when authorities are grappling to manage the fall-out from last Sunday’s fire that destroyed the Georgetown Prison on Camp Street. The opposition People’s Progressive Party Civic (PPPC) has already criticised Ramjattan for using the state of the sugar industry as a scapegoat.

The Public Security Minister acknowledged that more money needs to spent on empowerment, education and employment opportunities for youths.  With a number of Guyana’s sugar exports not doing well, he said government has had to decide on its priority areas for spending scarce cash. “If we have to take our monies and do what is priority by our Cabinet. It does not necessarily mean that importance is not attached to others,” he said.

Ramjattan suggested that with more revenues going into the national treasury from oil, Guyana would be able to spend more on a number of areas. “Until such time that we have a better day with an oil-stream revenue, we’ll have to start making some serious decisions and we have started that already,” he said.

The Public Security Minister said it is time to implement the numerous recommendations contained in several reports on crime and violence among youths in Guyana and the Caribbean. “”We in the Caribbean, we in Guyana do a lot of reports. Somehow, that has to stop. We have to start utilizing the recommendations in those reports to immediately walk the talk as it were because we sometimes don’t do that and we do that to the detriment of all of us” he said.

Painting a picture of the reality confronting authorities, he said youths are affected by unemployment, poverty, alcohol and drug consumption- youths smoking marijuana as early as 11 years old.

Concerns were also raised about virtual illiteracy to the extent that only one in every five youths detained can read and there are also declining performances at high school and university among males . “We have a number of things in these reports from which we have to move on,” he said.

The state of youths has been thrown in the spotlight following an attempted bank robbery allegedly involving two qualified professionals and a number of members of the Guyana Police Force.

2017-07-13
Denis Chabrol
Previous: Footballer charged with attempted murder
Next: Prisoners being “sanitized” of weapons, other prohibited items; inmate who attempted to escape from Lusignan shot