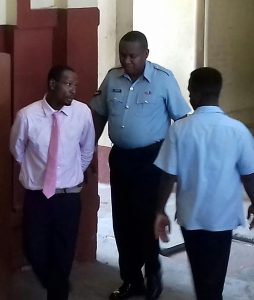 A Guyhoc Park resident was  Wednesday placed on bail when he appeared before chief magistrate Ann McLennan charged with the attempt murder of another man with whom he was playing football.

Kurt Joseph was not required to plea to the charge which alleged that on June 18, 2017 at TucVille, Georgetown he unlawfully and maliciously wounded Tavell Blackman with the intent to murder him.

Police prosecutor, Inspector Gordon Mansfield did not object to bail being granted but asked that special conditions be attached to the bail.

The facts presented in court stated that the accused and the Blackman, who are known to each other, were playing  football when an argument ensued and Joseph drew a knife on Blackman and stabbed him to his chest

Blackman was rushed to the Georgetown Public Hospital where he underwent surgery for the injuries sustained.

Chief Magistrate, Ann Mc Lennan granted Kurt Joseph GYD$150,000 bail under the condition that he reports to the East La Penitence Police Station every Friday until completion of his trial.