PPP parliamentarian, Irfan Ali asking a question on the allocation of GYD$130 million for a Special Purpose Unit of the National Industrial and Commercial Investments Limited to help prepare for the sale or divestment of Guysuco’s assets.

The Guyana government has to hire a “top accounting firm” to help assess the value of assets of the state-owned Guyana Sugar Corporation (Guysuco) to be sold, and GYD$130 million have been allocated for a Special Purpose Unit to spearhead the sale.

The announcement was made Thursday in the National Assembly by Finance Minister, Winston Jordan during consideration of a financial paper for additional monies. Jordan alerted the House that he would be returning for more monies for the Special Purpose Unit  which would be part of government’s holding company of assets, the National Industrial and Commercial Investments Limited (NICIL). “This is for the half year but it will be more,” he said.

In response to numerous detailed questions by opposition People’s Progressive Party Civic (PPPC) parliamentarians Juan Edghill, Irfan Ali and Komal Chand, the Finance Minister said monies from the sale of the Skeldon Estate would be ploughed into the cash-strapped Guysuco to assist with the servicing of its huge debts and running costs.

Jordan could not say how much monies could be earned by the sale of Guysuco’s assets because government’s estimates might be inflated and the administration prefers to await the valuation. “I cannot say what is the projected income. These are bids that are going to go out for public tenders and we are not sure what is the valuation of these assets,” he told the House sitting in the Committee of Supply. 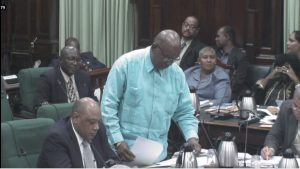 Finance Minister, Winston Jordan answering opposition questions on the allocation of GYD$130 million for a Special Purpose Unit of the National Industrial and Commercial Investments Limited to help prepare for the sale or divestment of Guysuco’s assets.

Ally asked the Finance Minister to tell the House what provision has been to deal with the impact that the closure would have on workers and families, whether a social and economic impact assessments of the closure on the community and what arrangements have been made to compensate workers and help families to transition.

Jordan acknowledged that those questions are relevant but they would be better answered by Minister of Agriculture, Noel Holder during a planned debate on government’s White Paper.

The Finance Minister said the decision to establish the Special Purpose Unit was made by Cabinet after discussions with Guysuco’s Board of Directors.

In addition to the already closed Wales Estate, Skeldon and Enmore will be closed. Production would be limited to Albion, Blairmont and Uitvlugt Estates. The State Paper on Guysuco states that Albion and Rose Hall estate’s cultivation will be amalgamated and will result in the closure of the Rose Hall factory at the end of 2017 with some of the lands being made available for diversification.