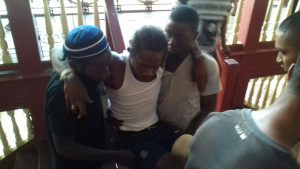 A city resident , who allegedly robbed a man of raw gold and cash, was Wednesday remanded to jail pending his trial.

Twenty-seven year old Akeem Rajkumar of 63 Leopold Street, Georgetown was also accused of being in possession of  50 grammes of marijuana for the purpose of trafficking.

Rajkumar is accused of using a gun to rob Dexter France of a haversack  ontaining raw gold, a timberland sneakers and a large sum of cash all at a total value of GYD$194,000 on June 27, 2017.

After the charge was read by City Magistrate, Fabayo Azore, he pleaded not guilty.

He was also charged with the indictable offence of being in possession of the marijuana for the purpose of trafficking. Rajukumar  was not required to plea to that charge.

The Magistrate upheld Police prosecutor Simone Payne’s objection to bail on the grounds of the nature and gravity of the offense and the allegation that a gun was used in the commission of the act.

Bail was refused and Rajkumar was remanded until July 26.

In response to an enquiry about why Rajkumar’s thigh was bandaged, the prosecutor told the court he was shot in the left knee during a scuffle with police.