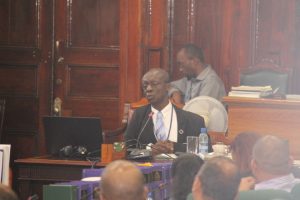 The Pan American Health Organisation (PAHO) and the Chairman of the bipartisan House Committee on Social Services, Dr Vindhya Persaud on Wednesday called for legal reforms and more monies to help combat suicide.

PAHO-WHO Representative in Guyana, Dr. William Adu-Krow noted that the mental health in 2011 received a mere 0.11 percent of Guyana’s health budget but buy 2017 that figure rose to 1.16 percent. “That is ten times but still very low…We still have a long way to go. Let’s do more,” he said. Adu-Krow noted that some countries like Australia have 10 percent; five percent in Papua New Guinea.

Speaking immediately after the PAHO official, Dr. Persaud, who is an opposition People’s Progressive Party (PPP) parliamentarian, echoed his call for more cash for mental health to stem suicide because Guyana loses persons who are the most productive stages of their lives. “If we look at the number of persons who commit suicide across the country, that age-group is perhaps the most productive years of a person’s life. It’s time when they are studying and it’s the time also when they have the ability to contribute back to the economy so we need to look at mental health seriously and we need to pour money into it because it is that important,” she said. She said the focus should be on “spending a lot of our funds” on prevention, local intervention and on those who failed to take their own lives. 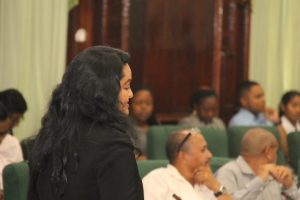 Chairwoman of the Social Services Committee, Dr. Vindhya Persaud speaking about suicide to colleague parliamentarians and officers of Parliament Office.

The calls were issued at an exchange with parliamentarians and staff of the Parliament Office on Suicide under the auspices of the Social Services Committee in collaboration with the United Nations, PAHO and the World Health Organisation (WHO).

In the area of legislative reform, he noted that the Criminal Law Offences Act punishes persons with imprisonment for aiding, abetting, counselling or procuring anyone to commit suicide but “this act does not given any provision for dealing with a survivor of a suicide act.” Adu-Krow also appealed to the government and opposition parliamentarians, including Junior Minister of Public Health, Karen Cummings, to amend the law that punishes those who encourage others to take their own lives. “If such a person escapes prosecution, this person is encouraged to commit suicide because it says that you are going to be imprisoned for life. Ladies and gentlemen, I think you can help us with this. Please take a look at that for us.”

The UN system also wants Guyana to scrap the law that provides for a maximum two-year jail term for those who attempt to commit suicide. “There is need for us to take a serious look at this as well,” he added. That is in addition to the Summary Jurisdiction Offences Act states that anyone who attempts to commit suicide shall be guilty of a misdemeanour and liable to a 12 month jail term, but he noted that “there is no allowance for treatment and evaluation in this Act.” 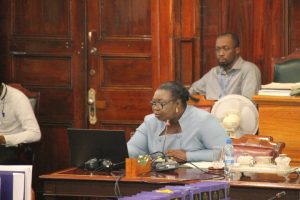 Director of the Mental Health Unit of the Ministry of Public Health, Dr. Util Thomas delivering a presentation on suicide at Parliament.

With regards to the “antiquated” Mental Ordnance 1930 that provides for the care of persons of unsound mind and for the administration and management of mental health in Berbice, Adu-Krow said the review of the laws and policy related to suicide prevention finds that “the current mental health system in Guyana is fragmented, poorly resourced and not integrateable to the general health care system.” The review states that the Ordnance fails to provide for the protection of the rights of mentally ill persons and is limited to the care and custody of persons of unsound mind.

“As such, it is recommended that care and custody of persons with mental health issues be included in a comprehensive mental health Act,” he said.

From the perspective of the Chairwoman of the Social Services Committee, she recalled that her motion for the decriminalisation of suicide was defeated by the one-seat majority coalition-led government. “The debate was furious. The outcome was not at all what we wanted. We wanted consensus on decriminalising something. When someone gets to that point in life where they feel their life is not of importance and they have to take it, why should legislation punish them further by saying after a survival attempt you can be in prison for at least two years. I think the time is now to end that cycle,” she said. Persaud recommended a re-examination of the issue by looking at all of the factors.

The PAHO official also cited the need for research to  determine why only certain sections of the society harm themselves, some times fatally. “We need research. We need to know why certain persons in our society decide to harm themselves and the only way that we can have an effective programme to mitigate those is when we have research that answer those questions for us,” he said. In Guyana, figures show mainly East Indians commit suicide mostly by consuming pesticides or hanging.

Director of the Mental Health Unit of the Ministry of Public Health, Dr Util Thomas  told the seminar that steps being taken to address depression and other mental health problems that could lead to suicide include the training of doctors across the country in the WHO-structured mhGAP intervention guide as well as the deployment of six psychologists and six social workers to interact persons at Kitty Health Centre, East La Penitence Health Centre, West Demerara Regional Hospital, Diamond Hospital and the Grove Health Centre. “There, they are giving important service to these communities,” Thomas said.

The National Mental Health Action Plan shows that 80 percent of Guyana’s doctors must be trained in the mhGAP to treat priority mental conditions such as suicide and self-harm. Thomas said so far 40 doctors have been trained and spread out across at 24 facilities in Regions Three, Six and Four.

She announced that the Mental Health Unit is about to launch the self-harm surveillance programme to ensure that all health facilities report all cases of self-harm within one week of presentation to the health facility. “The Mental Health Unit will ensure that each person, who indulges in self-harm, receives the proper treatment according to protocol and that involves seeing the psychiatrist at least once, making sure that his or her case is being managed by a social worker, they see a psychologist and that they are being followed up by a doctor in the community who is trained in the mhGAP intervention guide,” she said.

Outreaches have been held by the Mental Health Unit at schools, communities, markets and malls where they have already interacted with a total of 3,000 persons with a focus on depression, one of the major suicide triggers.

Thomas said the Mental Health Unit staff is working with the survivors of suicide victims to ensure that each family is coping and identify those who may need referral.