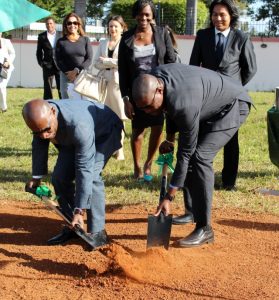 Vice-President and Minister of Foreign Affairs, Carl Greenidge and Minister of Public Infrastructure, David Patterson, turned the sod in a ceremony on Wednesday 27 June to mark the construction of a permanent chancery for the Guyana Embassy in Brazil. Work on the new building is due to begin shortly in Brasilia. (Ministry of Foreign Affairs photo)

Guyana has turned the sod for the construction of its own embassy in Brasilia, the capital of Brazil, to cut costs and send a strong message of the “high premium” this country places on relations with its Portuguese-speaking neighbour, Brazil’s Ambassador to Guyana, George Talbot said.

“Guyana places a high premium on its relations with Brazil. We believe that the construction of a permanent chancery will be a demonstration of the depth and value Guyana places on our diplomatic relations, the 50th anniversary of which we will celebrate in 2018. Beyond that, we expect it will be cost effective in the medium to long run relative to the rental of several buildings as is the case now,” he told Demerara Waves Online News.

Foreign Affairs Minister, Carl Greenidge and Minister of Public Infrastructure, David Patterson recently participated in a turning of the sod ceremony at 51 Embassy Sector South, Brasilia, D.F. where the new Chancery would be located.

The cost of constructing the embassy complex is not yet known because, according to Talbot, the project is at the design stage. Construction could begin in 2018, he said.

The Guyana envoy to Brazil said the complex would include the embassy, official residence of the ambassador and quarters for the diplomatic staff. “The design would allow for a phased approach with the Chancery itself being the first priority.” Talbot explained that the new complex would feature a Chancery with all the facilities necessary for effective diplomatic engagements – reception/social area, large conference room, bilateral rooms and other modern amenities.

Ambassador Talbot said the the Official Residence will be adequate to accommodate the President or other government officials visiting Brasilia.