Guyana begins shipping US$17 million worth of paddy to Mexico 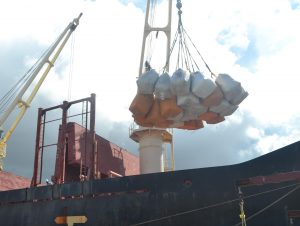 The paddy being loaded on a Mexico-bound cargo ship at the John Fernandes wharf.

Guyana on Friday began shipping US$17.7 million (GYD$3.8 billion) worth of paddy over the next two months, the Ministry of Agriculture said.

The shipment is being made through the Guyana Rice Development Board (GRDB). This initial shipment which totalled 17,000 tonnes is the first batch of paddy from a contract that will see 60,000 tonnes shipped over the next two months.

GRDB General Manager, Alison Peters said that the shipment will arrive in Mexico within the next few weeks.

“This is the first shipment of paddy to be sent to Mexico. As you know, this is a new market that we have actively pursued and today we are finally able to send the first shipment off. This shipment is 17,000 tonnes and between the next two months, we will be shipping an additional 43,000 tonnes of paddy.” Ms. Peters was quoted as saying in a statement issued by the Ministry of Agriculture.

Government says  this move signals a significant boost to exports of paddy to non-traditional markets. It was 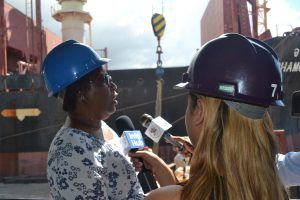 announced back in March that the Mexican Government cleared the way for countries to bid for quotas to import rice and rice products into the country. Guyana was granted approval to send paddy to Mexico as the National Service of Health, Safety and Agro-Food Quality (SENASICA) had recently approved imports of paddy from Guyana.

Earlier this year it was reported that the Mexican official Gazette stated that during January to December 2017, the Government of Mexico granted approval for 150,000 metric tonnes of paddy and rice products to enter Mexico from outside of the North American Free Trade Agreement (NAFTA), free of the payment of taxes (zero taxes). Normally taxes by countries other than NAFTA member states trading with Mexico are required to pay a tax of 9% on paddy and 20% on rice products.

Agriculture Minister Noel Holder said that the Mexico agreement is a step in the right direction, as government actively pursue new markets for Guyana’s rice and paddy.

“This contract represents the first new destination for Guyana’s rice and is the first of several new markets being targeted in the months ahead. In pursuit of new markets government is not only seeking to secure new markets, but markets that will offer premium price for the local grain,” the Minister said.

The start of paddy shipments to Mexico, comes at a time when Guyana’s rice industry recorded paddy production of half a million metric tonnes for the first crop this year.

This is the first major paddy and rice deal to have been struck since Venezuela stopped buying Guyana’s rice under the PetroCaribe arrangement almost two years ago.