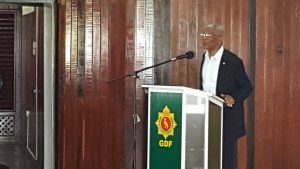 President David Granger has decided to order a Commission of Inquiry (COI) into the alleged assassination plot against him.

Minister of State Joseph Harmon made the announcement during a post Cabinet press briefing at the Ministry of the Presidency.

The Minister said that, within two weeks’ government will make public those who will conduct the Commission of Inquiry.

The President has the authority to order a COI into any matter that is of public safety and happiness of the people of this country, the Minister was quoted as saying in a release issued by the Government Information Agency.

“Any plot or attempt to cause harm to his Excellency must be something that is in the public interest. So it is not a matter of not having confidence in any particular entity but it is the right of the president to determine if he requires any deeper level of inquiry into any matter”, Minister Harmon explained.

In April reports, surfaced in the media of an alleged plot to kill the Head of State. During the said period the Minister of State had disclosed at a post-Cabinet press briefing that Cabinet and the Guyana Police Force (GPF) were aware of a reported threat made against President Granger’s life. A number of persons had been questioned by police in connection with the alleged plot.

2017-06-30
Denis Chabrol
Previous: Guyana begins shipping US$17 million worth of paddy to Mexico
Next: Security guard gunned down at supermarket