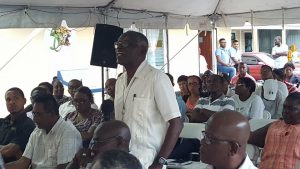 Father Clifton Elias making a point at the Stakeholders’ Meeting held at the ‘A’ Division Police Headquarters, Brickdam.

Concerns have been raised about the loitering of uniformed school children at a number of city bus parks where they also smoke marijuana.

However, ‘A’ Division Commander, Assistant Commissioner, Marlon Chapman said since he has been posted to the division a few months ago, the Ministry of Education has not asked for help in countering deviant behaviour by students.

“We cannot take away the fact that the School Welfare Department has a function…I know that there are times when they would make requests for assistance from us and readily that assistance is granted. I have to say we have received no request since I came to ‘A’ Division; at ‘C’ Division it used to be a regular feature,” Chapman said.

Chapman agreed that children should not be loitering and that the Deputy Divisional Commander often chases them off the park.

He said in the past plainclothes police have been deployed to deal with marijuana smoking at the park, but “the success has been marginal.” Chapman promised to take further steps to address the problem. 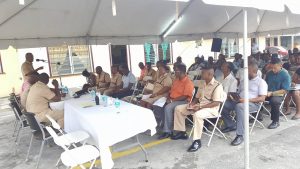 Top police officers of ‘A’ Division meeting with stakeholders on June 27, 2017 at the Brickdam Police Station compound.

Anglican Priest,  Clifton Elias told a stakeholders meeting with top divisional police officers that he was”appalled” at the number of mainly secondary school students being on the streets long after 9:30 AM.

“If those children at the market square there now have any regard for policemen, they will cease doing many things that are being done there to the detriment of our country,” said Elias.

Elias said he often wonders whether there is a relationship between the Ministry of Education and the Ministry of Public Security to deal with concerns such as loitering school children. Elias recommended that the two government ministries work closely to grow and develop children.

A pastor said marijuana use is prevalent around the bus park at the Stabroek Market area. “A lot of school children after hours are indulging in smoking marijuana right around the same area so you need to get some plainclothes police to do some work and put them before the court,” the pastor said. 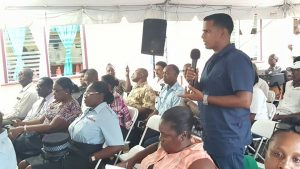 The Community Relations Officer for ‘A’ Division promised to also visit North Ruimveldt Multilateral and the East Ruimveldt School to talk with teachers to about fighting by students.

Project Impact (Albouystown) member, Seeram Madray praised Sergeant Beckles for voluntarily visiting the Charlestown Secondary School for the past two years and meeting with students and teachers to address concerns and motivate them positively. He recommended that other police officers conduct similar exercises at nearby schools.

“This has brought about a change from children going to school with sharp objectives- knives and other things- and I don’t know if you can ask other police officers to go to schools close to their stations and just have a chat with the students and the teachers once a month or once every two months and see the difference that it will make in the schools,” he said.