Public Utilities Commission has to be “retooled” as telecoms liberalisation nears 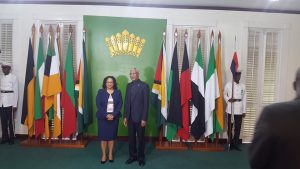 Chairwoman of the Public Utilities Commission, Dela Britton and President David Granger shortly after she was sworn in before the Guyanese leader.

The newly-appointed Chairwoman of the Public Utilities Commission (PUC), Dela Britton on Wednesday listed retooling the regulatory agency as one of her priorities at a time when Guyana is preparing to liberalise the telecommunications sector.

“The Commission, as I said, has to be retooled and being retooled means that we have to have the necessary personnel to assist in that regard,” said Britton, an Attorney-at-Law shortly after she took the oath of office before President David Granger.

The NTA will absorb the National Frequency Management Unit (NFMU).

Hughes said the outstanding issues would include the new pricing for spectrum, process for receiving applications for new licences and negotiations between the Guyana Telephone and Telegraph Company and the Guyana Revenue Authority.

Guyana’s modern telecommunications act has been already passed by the National Assembly and signed into law by President Granger.

In anticipation of telecommunication liberalisation, the Guyana Telephone and Telegraph Company and Digicel have been trimming their operations to become more cost effective.