Social activist, Minister of Citzenship and Immigration differ on outcome of talks on Haitians 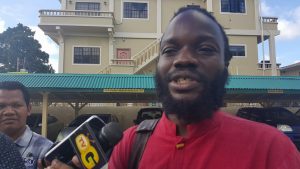 Mark Jacobs speaking with reporters shortly after meeting with Minister of Citizenship and Immigration, Winston Felix.

Minister of Citizenship and Immigration, Winston Felix on Wednesday denied that agreement was reached Wednesday afternoon with a group of persons for several Haitians to be granted work permits, paving the way for them to be released.

“I’m saying that I am in a meeting and I know nothing about what you are talking about,” Felix told Demerara Waves Online News when asked to confirm whether an agreement was reached for the Haitians to apply for the permits.

Social Activist, Mark Jacobs told reporters at approximately 3:30 PM immediately after he and others held talks with Felix that they were informed that government has concerns about human trafficking and illegal migration and whether the Haitians’ passports and birth certificates were valid.

Jacobs said Felix did not offer the option of having the Haitians apply for work permits, but it was the delegation that asked.

Pressed on the outcome of the talks in keeping with his call Tuesday evening that the Haitians should be allowed to remain in Guyana because they were not trafficking victims and they had entered Guyana legally en route to French Guiana, Jacobs said he and other members of his delegation secured a commitment that they would be allowed to remain in Guyana.

“We have been given an opportunity to apply for these persons to stay in Guyana,” he said, adding that there are persons in Guyana willing to accommodate and employ them. Jacobs said the applications would be submitted Thursday but he could not say how long the process would take and how soon after the documents are submitted that the Haitians would be released.

He said there are seven adults and seven children including one child who apparently has no parent.

More than 15 years ago, a number of Angolans, who had arrived here in Guyana from neighbouring Brazil, had been eventually granted permission to remain and work here.

2017-06-14
Denis Chabrol
Previous: “We have recognized we have made a mistake” in handling Haitians- govt minister; hints at softer approach
Next: Govt held sham consultations on Guysuco’s future- Jagdeo; investment broker rejects accusation