“We have recognized we have made a mistake” in handling Haitians- govt minister; hints at softer approach 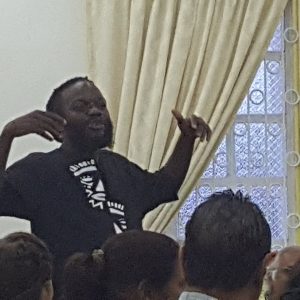 A government minister Tuesday evening said Guyana has made mistake in the way Haitians arriving here n route to French Guiana has been handled and he hinted that that that approach would be reversed.

Junior Minister of Social Protection, Keith Scott was at the time responding to wide-ranging concerns about the status of the Haitians by attendees at a Conversation on “WALTER RODNEY: Life, Activism, and Scholarship” to mark the 37th anniversary of his assassination at the height of a civil rebellion to oust the then Forbes Burnham-led People’s National Congress dictatorship.

“As regards the current situation, I can tell you right now as of tomorrow (Wednesday) it will change. We have recognized that we are a partner to the CARICOM (Caribbean Community) free movement of people and Haiti is part of that process , and Guyana is part of that process ….we have recognized we have made a mistake …Almost with immediate effect , there will be a change of policy towards persons who have been mistreated,” said Scott, a former member of Rodney’s Working People’s Alliance (WPA).

Several years later, he left the WPA and formed the little known National Front Alliance (NFA) that is part of the People’s National Congress Reform (PNCR)-dominated A Partnership for National Unity (APNU).

Farmer and social activist, Mark Jacobs first raised the plight of the Haitians at the Walter Rodney commemorative event held at the National Library, saying that they were being held captive merely for legally entering Guyana. He noted that a number of adults are being held under tight police security and their children elsewhere without knowing where each other is staying. “The government cannot say why they have removed these people and holding them hostage, holding their passports… These people are not being held against their will; they are not being trafficked. They paid someone to ferry them on to French Guiana. What’s the crime in that?,” he said. Jacobs said he visited one of the detainees and police arrived with a rifle and a handgun. He plans to seek legal assistance in favour of the Haitians.

Scott hinted at a change in government’s heart towards the Haitians one day after Minister of Immigration and Citizenship, Winston Felix said eight others, including a few children who do not have monies to pay for their return tickets. Felix has also said that eight adults and six children were ordered to return to Haiti after their return tickets were upgraded.

The Immigration and Citizenship Minister has said the decision to send back the Haitians followed a police investigation and legal advice. He has described their presence in Guyana  as being part of something similar to human trafficking, while Police Commissioner Seelall Persaud said they were part of human smuggling to other countries.

The Walter Rodney forum decided to pass a resolution and dispatch it to President David Granger “to hold the government accountable.”

Suriname last year introduced visas for Haitians after they had begun turning up in large numbers there before moving on to French Guiana which also shares strong historical ties to France.