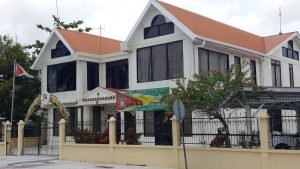 The Ministry of Indigenous Peoples Affairs prepared a voucher for a Bourda Market Vendor $250,000 for a quantity of fruits, greens and vegetables but when it cut the cheque, that was made out for $2.5M—monies the Ministry is still to fully recover.

The sordid state of affairs with what appears to be a preferred supplier was laid bare today the Public Accounts Committee of Parliament met to address the financial discrepancies which were raised by the Auditor General in his 2015 Report.

King was unable to provide a breakdown of more than $40M used by the Ministry for dietary and other supplies for the Amerindian Hostel.

The Committee was at the time querying discrepancies raised where some $540,000 was being spent monthly for the supply of fruits, greens and vegetable.

This represented a $6.7M chunk of the $47M allocation for the hostel but when asked to provide a breakdown.

Ali, in putting his questions to the Permanent Secretary,  pointed to the more than $40M and asked “how much if any of that amount is spent on the hostel.
King responded saying yes but I can’t quantify it now.”

The Permanent Secretary was asked to provide a breakdown of the expenditure and said he would need 20 minutes since that information was at his office.
Ali immediately suspended the sitting for 20 minutes to facilitate King and his team on his return informed the PAC, he still did not have the information.

Ali had earlier suspended the sessions telling King, “I am going to give you the chance to get the breakdown, you must have the breakdown don’t tell me you don’t.”

The Permanent Sectetary was found to be less than forthcoming when pressed on the existence of a database of suppliers for the Ministry.

The PAC was at the time questioning the sketchy circumstances surrounding the contract arrangement with the Bourda Market greens vendor who was overpaid by more than $2M.

King told PAC a three quotation system was used with the permission of the National Procurement and Tender Administration Board and that the suppliers had been obtained using a register. This was found to not be the truth as no such register exists.