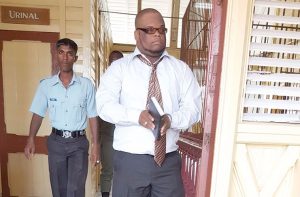 The sentence was handed down by Justice Navindra Singh after a 12-member mixed jury found him guilty on May 19, 2017.

Sentencing was deferred until Monday for a probation report on his behalf.

The jury found Mc Dougall guilty on the lesser count of manslaughter.

McDougall was charged with the murder of Raghoo, a dredge owner, in 2014.

Raghoo was gunned down on Vlissengen road following a robbery which was carried out by two men on a motorcycle.

The 43-year-old businessman had stopped at a traffic light on Vlissengen Road in the vicinity of the Botanical Gardens while en route to downtown Georgetown to conduct business.

The men, who carried out the brazen attack, had also shot his wife, Sheherazade Raghoo, snatched a bag containing some GYD$4 million and made good their escape.

McDougall was subsequently arrested and charged with the murder of Raghoo and identified as the rider of the getaway motorcycle that was used in the robbery and murder.

Another man, Jermaine Otto, was identified as the shooter. He was also charged with murder. Otto, however, perished in a fire which occurred at the Camp Street Prison, on March 3, 2017.