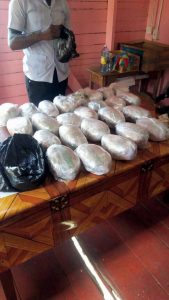 The marijuana police said they seized at Aurora, Essequibo Coast.

Five persons, including a woman, were Monday morning arrested in connection with a 12.3 kilogrammes marijuana bust, police said.

The Guyana Police Force says its ranks of  acting on information stopped and searched a hire car about 08:00hrs this morning on the Aurora Public Road, Essequibo Coast.

There, police said, they found a carton box containing 25 taped parcels of cannabis with a total weight of 12.3 kilograms.

Five persons inclusive of the driver and a female have been taken into custody and are assisting with the investigation, police said.