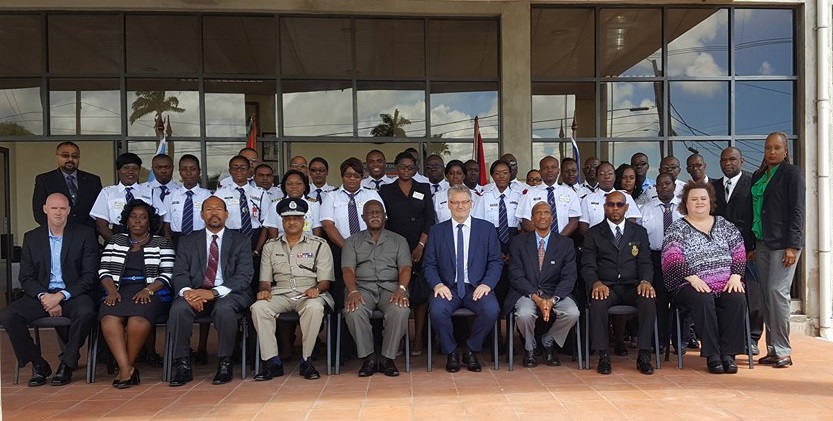 Assistant Secretary General of the Caribbean Community (Caricom), Dr. Douglas Slater on Monday called on customs and immigration officials not to take bribes as efforts continue to reduce security risks at the border.

Addressing the opening of a joint national border security workshop for Guyanese customs and immigration officers, Slater noted that law enforcement agents are vulnerable to inducements because on bad economic times that have hit Caribbean countries.

“With the economic situation in our region, you are going to be faced with a challenge- the temptation of corruption and I am saying that plainly because we know that our workers within our border protection agencies, they do have that temptation and the criminals are out there making offers.

You have a responsibility and we expect you to uphold that responsibility to desist from such temptation because if you do not have proper discipline and professionalism, chaos will result,” Slater told participants of the workshop organised by the CARICOM Implementation Agency for Crime and Security, European Union and the United States Customs and Border Protection.

The Caricom Assistant Secretary General urged participants to become familiar with the Caricom Single Market and Economy and the rights of the free movement of Caribbean people.

While border protection agencies need to crack down on the trafficking of drugs, guns and people as well as guard against the entry of plant diseases and evasion of import taxes, Slater highlighted the need for customs and immigration officers to be professional, vigilant and compassionate.

Minister of Immigration and Citizenship, Winston Felix noted that often persons are caught with false immigration stamps in their passports and last week cocaine, possibly from Guyana or Suriname, was found in a shipping container in Jamaica. He said the training outcomes should be supported by the use of intelligence gathered. “We make use of the collection, collation and dissemination of intelligence to support whatever happens on the border and you the participants- whether it be customs or police- must be able to transfer this training to the job,”  said Felix, a former Police Commissioner.

Felix also echoed Slater’s call not to fall prey to corruption. “Fight the corrupt elements, Don’t let them get to you. They get to you, they destroy you and by extension they destroy the image and reputation of the government,” he said. Only recently a Drug Enforcement agent of the Guyana Revenue Authority (GRA) was charged with a GYD$500 million cocaine-in-dressed lumber bust.

Police Commissioner, Seelall Persaud, in brief remarks, credited the President David Granger-led administration with having the political will to stamp out terrorism and other forms of organised crime. “In Guyana, we are fortunate to have the political will to deal with crime and violence. That is demonstrated on several fronts and highlighted by His Excellency the President himself chairing the National Security Committee. That is a necessity- political will is a necessity to deal with the crime and violence problems that exist today,” he said.

The workshop’s training tools and manuals have been developed to facilitate harmonized standards and practices, policies and procedures to be used by Caribbean countries. “This training is a pilot of these tools and manuals in a Caricom member state. The training material and plans were developed in accordance with national and Caribbean Community (CARICOM) laws, rules, and regulations and based on priorities identified by CARICOM member states through previous surveys conducted by IMPACS,” organisers said.

At the end of the workshop, participants are expected to have improved interviewing techniques, better fraudulent document inspection and conduct body language analysis and examine luggage and persons effectively.

“This training will enhance the capacity of border security officials to identify and intercept persons, goods or vessels traveling across borders by illicit means or with illicit intent,” he EU and CARICOM IMPACS said in a brief on the training.  They noted that improved screening techniques will allow a reduction in wait times at checkpoints as passengers and cargo of no interest can be readily identified and processed. Reduction in litigation and poor publicity that may result from a less informed interaction with immigration and customs officials is also another of the expected outcomes.