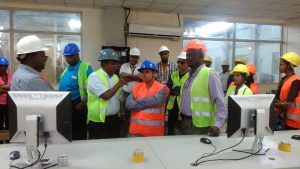 Minister within the Ministry of Finance, Jaipaul Sharma, Friday (June 9, 2017) announced that he will be recommending a full-fledged investigation to massive mismanagement and corruption to the highest involving the US$200M Skeldon Sugar Modernisation Project.

Sharma was at the time briefing members of the media following a site visit to the Skeldon Energy Inc, co-generation plant which has been shut down for the past six months, unable to generate electricity using the 30MW bagasse fueled generators.

Media operatives were moments earlier told that in order to bring the plant up to a safe enough operating standard will require rehabilitation to the tune of US$2.5M.

As t relates to remedying the identified defects at the plant, Rose told media operatives SEI has planned a US$17M repairs to the facility. 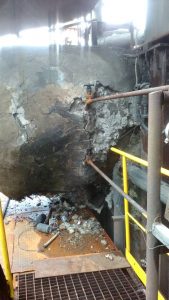 A deteriorated section of the Skeldon Energy Inc’s co-generation plant.

The SEI Board today toured the facility and during a subsequent media interaction, Rose indicated that it was safety issues along with the malfunctioning boilers that had caused the plant to be shut down over the past six months.
According to Rose, the design of the boiler is in consistent with Guyana conditions since the boiler is repeatedly clogged with ash in the burning of the bagasse.

During the tour of the plant it was observed that the pipes used to circulate the steam is eroded to the point where even touching it can cause a likely explosion. The multi tiered boilers were observed to be badly eroded from its base to tip.

Other visible deficiencies observed on the boiler is evident at the furnace where the insulation appeared burnt out as a result of the heat.

SEI has since contracted a South African firm to undertake the emergency repairs.

Briefing members of the media, the SEI Chairman said, “The main problem we have to deal with, we have not been able to provide energy for first crop and the reason for that is we had to embark on major repair works,” he said.

He said to Rose, SEI will be spending the initial US$2.5M from its coffers for the emergency works in order to restart the co-generation plant and the works should be completed by the end of August. He said the company has set its sights for a January start time for the US$17M overhaul of the boilers. It was explained that SEI is looking to install a single boiler to replace the malfunctioning two. 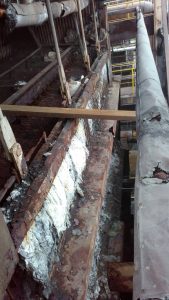 A section of Skeldon Energy Inc’s co-generation plant in a state of disrepair.

Grilled on where SEI would be securing the funds, Rose said from projections in company’s business plan, the company can be viable if all conditions are met.

He said it was not a case where SEI was looking to ask government for the US$17M, since the company is exploring other options.

He said SEI can either secure the money through a commercial loan, a buyer’s credit arrangement, a third party equity investor, and divestment or possibly even raised from the GRIF funds.

The SEI Chairman made it clear however that several of the options being explored are contingent government vesting the assets over to SEI—something still to be done since the company was incorporated in February 2015 and the finalization of the sale in April of that year.