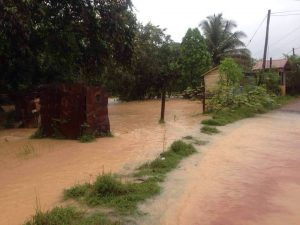 As residents and businesses in Mahdia valley grapple with severe flooding, central government said the Civil Defence Commission (CDC) is on standby to provide initial relief from a warehouse in Region 8.

Minister of State, Joseph Harmon confirmed that the CDC has already informed him about the flood caused by heavy overnight rainfall that has continued into Friday morning, and that he is expected to receive another briefing on the situation there.

“The Civil Defence Commission has actually pre-positioned supplies from the CDC in some of these areas; Mahdia being one, Orinduik the other one and so that anything which occurs within that area that needs heavy lifting, that there is what we call pre-dumping or a forward logistic base established in these areas and the initial response can occur,” Harmon told a post-cabinet news conference.

Region Eight Chairman, Bonaventure Fredericks reportedly told the Government Information Agency that in some parts of Mahdia the water level on the roadway is approximately four feet deep.

At least 500 homes are affected and road access to the airstrip has been cut off, however there has been no report of damages to residents’ properties except for a mechanic shop which is under three feet of water, GINA said. 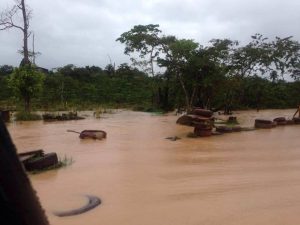 Fredericks said that the water is receding quickly and the region has already engaged the Civil Defence Commission to be on the alert and prepared for any emergencies.

However, he is confident that the Regional Administration would be able to provide relief to residents and repairs to the roads. “There is not such a great need that we cannot handle it at this time but we have to wait until the water goes down to assess how much help we can give to the persons affected,” Fredericks said.

The Region is also looking to undertake emergency drainage works to relieve the condition as it continues to monitor the situation.

When GINA contacted Director General CDC, Retired Colonel, Chabilall Ramsarup said his entity was  awaiting an updated assessment from the Region to determine what should be the necessary interventions.

Residents and businesses have been urged to relocate to higher ground as a result of previous flood in some parts of the region but they have ignored those calls.