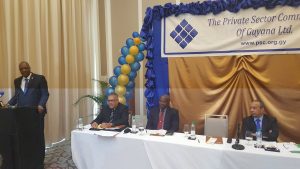 Even as the umbrella Private Sector Commission (PSC) called on government and the opposition to deliver a “good life”, Minister of State, Joseph Harmon on Thursday assured that there is no feud with the private sector but said when the coalition took office more than two years ago, it was busy dismantling a fake economy.

“We have had to confront enormous inherited problems such as the existence of an illusionary economy that hindered development of Guyana’s productive sector and sidelined legitimate businesses, the lack of focus on value-added production and a limited ability to effectively allocate resources and effect public expenditure because of our limited capacity, our human capital, to be able to deliver on some of the projects the government has rolled out,” he told the formal session of the PSC’s Annual General Meeting.

Harmon reiterated that government was committed to creating an enabling environment for the private sector by ensuring there is no executive interference, efficient law enforcement and regulatory agencies, a highly educated workforce and infrastructure to facilitate access and use of  Guyana’s abundant resources.

The Minister of State highlighted the importance of legitimizing Guyana’s economy, establishing transparency and accountability as well as proper system and due process to “place Guyana on the path of true and sustainable development.”

Against the background of Finance Minister, Winston Jordan scolding the private sector for contributing a mere five 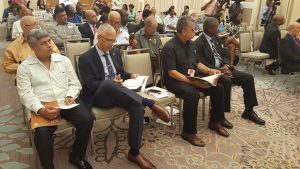 Delegates and special invitees at the opening session of the PSC’s Annual General Meeting held at the Marriott Hotel, Kingston, Georgetown.

percent to economic growth and lashing out at the private sector for requesting concessions without mathematical justification, the Minister of State held out the olive branch to the PSC. “I have already alluded to the strategic position of the Private Sector Commission to the nation’s development and  I wish to debunk, here, the perception or suggestion that the government views the Private Sector Commission with hostility and that it is a feud between the government and the private sector,” he said.  Harmon said government ministers or officials have always agreed to meet private sector officials sectorally or at the level of the regional chambers of commerce.

“I, therefore, take this opportunity to end this myth once and for all that there is no  fight, there is no feud between the government and the Private Sector Commission,” he said to loud applause.

The umbrella PSC used the occasion of its 25th anniversary, to call for the creation of the environment to realise a”good life”. Lamenting that the greatest single challenge facing Guyanese are “proper paying jobs” for the thousands of University of Guyana graduates annually.

“We promise them a good life in Guyana. We must create it- all the leaders, together- and a good life is just not talk. We have to create these jobs,” said Chairman of the PSC’s Governance and Security Committee, Gerry Gouveia. He called on the political, trade union and religious leaders to work tirelessly to create and enhance local and foreign investor confidence.

“I dare say we are not doing a good job. The fact that we are not creating enough jobs for our young people, the fact that we keep promising them and it’s an elusive promise, elusive dream, we need to stop it. We need to create that enabling environment to foster and enhance investor confidence,” he said.

The PSC executive member urged that changes of government “should not stop the continuity” and instead the partnership between the public and private sector must survive on the platform of the National Competitiveness Strategy that had been supported by the Inter-American Development Bank (IDB).  In contrast, he said communication between the PSC and government has been fragmented and isolated through certain ministries.

That business organisation recommended that legislation be passed to help guarantee investor confidence and protect investors against actions by new governments using mechanisms such as the State Asset Recovery Agency (SARA). “We are no for one moment saying that if there are illegal things happening that they must not be dealt with, but we are very concerned about the relationship and involving ourselves in partnerships, in privatisation deals that could then come under serious scrutiny politically and so we must have continuity to foster and enhance investor confidence,” he said.

PSC President, Eddie Boyer called on the David Granger-led administration and the opposition People’s Progressive Party (PPP) to join hands for the betterment of Guyana instead of purposeless political bickering in these challenging times. “I would like to ask the opposition and government to work together in the interest of all, allowing the country to bring on board fresh ideas instead of bickering and casting blame,” he said.

He restated that Guyana’s economic slowdown was linked, lower remittances, reduced disposable income due to new and increased taxes such as the 14 percent Value Added Tax on water and private education. He, however, said government and the PSC eventually worked together to reverse the decline somewhat. “While these were factors for a catastrophe waiting to happen, government and business worked together to stem the tide of despair,” the city businessman said.

Former PSC Chairmen Yesu Persaud, Beni Sankar, Manniram Prashad, Peter De Groot, Retired Major General Norman Mc Lean and Ramesh Dookhoo were among those who received awards for service to their organisation over the past 25 years.