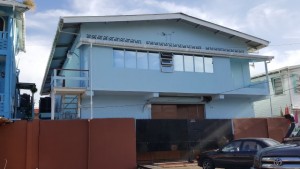 Government is cutting ties with all privately-owned pharmaceutical bonds, even as it prepares to beef up its storage facilities- all aimed at slashing costs and more efficiently storing and distributing medical supplies to the public health sector, Minister of Public Health, Volda Lawrence said Wednesday night.

“As you know, we have had issues with private bonds. This year we are focusing on ensuring that we can be able to stock our own medications, cut back cost and invest in the sector of itself,” she told reporters.

The NGPC bond was being rented at GYD$9 million per month. Similarly, she said the Larry Singh-owned bond at 29 Sussex Street, Albouystown, which is being rented by government for GYD$25 million monthly, would soon be vacated. 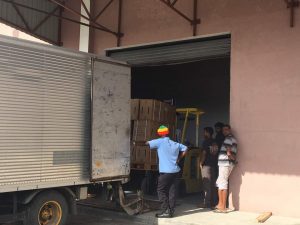 One of the privately-owned trucks being loaded with GPHC medical supplies at the New GPC bond. That truck later delivered the Kingston drug bond.

The David Granger-led administration had come in for bruising criticism from the opposition People’s Progressive Party (PPP) late last year over the apparent cozy deal with Singh that had led to him to purchase and outfit the building to house a pharmaceutical bond for rental to the government. At the same time, NGPC had said that it had been willing to rent more bond space to government for GYD$19 million monthly.

The Public Health Minister said the  GYD$50 million in outstanding rent to NGPC would be paid in keeping with the tenancy agreement.

Asked whether the government bonds at Diamond, Kingston and GPHC could house all of government’s drugs, she said a lot of expired drugs were recently destroyed and so there is sufficient space at the state-owned facilities. Additionally, Lawrence said the rate of distribution of drugs to public sector health facilities has increased, resulting in a smaller stockpile of supplies. “We have changed the system in terms of how the drugs are going out to the various institutions; we try to speed up that whole process so it is no longer a long delay within the warehousing,” she said.

A number of digitized systems that have been used by the United States Agency for International Development (USAID) and other donor agencies to manage drugs and other medical supplies are being adopted by government.

Lawrence added that a tender for the extension of the Diamond Bond is scheduled to be opened next week and the Kingston Bond would be repaired. “We are looking at savings whereby we can do some more work on the Georgetown Hospital Corporation bond of itself in terms of extension so that we can come out of the other rental bond so it’s a work in progress,” she said.

The Public Health Minister said there was no first-in/first-out system, resulting in the wastage of millions of dollars.

She dismissed suggestions that terminating the rental with NGPC could be seen as a way of targeting that company for political reasons. “I don’t see that. I have never seen that…I came into the ministry with a mandate. Having had experience with the people in the social arena, I know the feelings of the people out there and my greatest objective is to ensure that I remove all the hindrances that stop the poor people from getting the best health care service,” said Lawrence.