Intensifying its protests mainly in the opposition People’s Progressive Party (PPP) stronghold of Berbice against the closure of sugar operations there, the Guyana Agricultural and General Workers Union (GAWU) has called on government to hold a referendum on scaling down the Guyana Sugar Corporation (Guysuco).

GAWU President, Komal Chand accused government of breaking its 2015 general election promise that the sugar industry would not fail and said the time has come for a referendum on the future of the sugar industry.

“If tell the people ‘vote for me and sugar is too big to fail’ and you come now and you want to close the sugar , you suppose now to go to a referendum….Hold a referendum on sugar. Government must hold a referendum. Let the people speak,” he told a public meeting Tuesday morning at Skeldon.

About 2,000 persons, including sugar workers and business owners, participated in a march and rally to vent their frustration against plans to sell the Skeldon, Rose Hall and Enmore estates. Wales has been already shut down. Aiming to produce 174,000 tons of the sweetener annually, government last month announced that Guysuco’s sugar operations will be limited to the Albion-Rosehall, Wales-Uitvlugt, and Blairmont factories.

Mahadeo warned that “we are not going to take this lying down” and that plans are a foot to stage larger protests.

Charging that government failed to put details in its White Paper on the sugar industry, the GAWU President slammed the David Granger-led administration for being opposed to consultation and transparency on the sugar sector. He cited the recent decision by the Speaker of the National Assembly to block the bipartisan Economic Services Committee from visiting Guysuco’s operations this week. 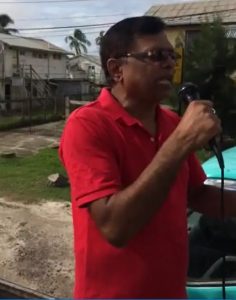 The veteran union leader warned that with the closure or shrinking of a number of sugar operations, medical benefits and drainage and irrigation services would go. Government, in its White Paper on Guysuco, has said those non-core operations would be taken over by central government.

The GAWU President warned that while government was aiming at cutting Guysuco’s operational costs, closure of sections of the corporation would see the government spending much more on combating crime and other social problems such as divorces and more uneducated children.”It is better to invest in sugar and save sugar,” he said. Similar concerns were echoed by Dr. Mahadeo  if government puts profit before people.

The GAWU official questioned how GYD$30 billion could have been spent on Guysuco last year and a mere 189,000 tons of sugar were produced. He flayed management for the failure of industry.