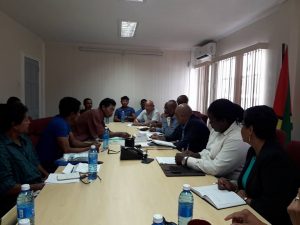 A former Toshao of Chenapau points out the areas where the residents have traditionally worked and which lie beyond the boundaries of the Kaieteur National Park. He also showed the Minister that these areas are only accessible using trails that go through those lands. (Laura George photo)

Hours after a brief meeting between the Toshao of Chenapau and the Minister of Natural Resources, Raphael Trotman on the vexed question of mining in the Kaieteur National Park, the National Toshaos Council Thursday night called on President David Granger to withdraw the charges.

More than 20 miners, who were arrested Sunday for allegedly mining in the Kaieteur National Park, have since been released from police custody and charged with mining in that protected area. They have to appear at the Mahdia Magistrates’ Court to answer the charges that have been leveled under Guyana’s Mining Act.  They deny that their mining operations are within the Park.

Earlier Thursday representatives fretted about the short duration of the meeting between his delegation and the Natural Resources Minister.

“A delegation of residents of Chenapou, along with supporters met with the Minister of Natural Resources today to highlight their grave concerns and seeking urgent intervention.. Minister Raphael Trotman stayed for about 10 minutes and said he will get back to them on their requests. The community awaits an update from the Hon. Minister but maintain that they also await an audience with the Head of State,”  one of the participants said on her Facebook Page.

The Ministry of Natural Resources has not said anything about the meeting, and Trotman could not be reached for comment.

The NTC said the Patamona people, who live in the Potaro area, are under threat more so since the Kaieteur National Park was extended in 1999 to take in their traditional lands without consulting them. “It is only natural that after these disasters, that our millennia’s old survival instincts should take hold, however, these very practices are now deemed to be criminal as the Protected Areas has now criminalized our very traditions and infringed on our human rights.”

“The National Toshaos Council calls on His Excellency to closely examine the events that unfolded in the recent months as it relates to the Indigenous Peoples of Guyana, the infringement on our rights by private entities aided by Government and sometimes by Government themselves,” said the Council which is a statutory body.

The NTC has objected to the establishment of a Lands Commission of Inquiry into ancestral and Amerindian lands by President David Granger. Instead, that body has called on the Guyanese leader to stick to his promise and establish a separate inquiry into Amerindian lands.