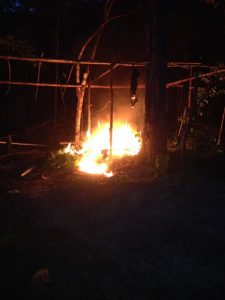 The marijuana field at WISROC Linden that police destroyed by fire.

Four persons, including a husband and wife, have been arrested in connection with separate seizures of guns, ammunition and marijuana.

More than 11 kilogrammes of marijuana and two handguns were allegedly found in the possession of three persons. The fourth person was arrested in relation to the discovery of a huge marijuana farm at WISROC, Linden.
The Guyana Police Force said, acting on 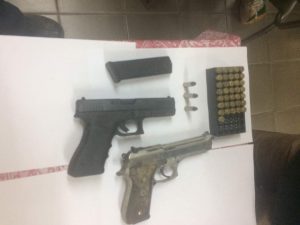 The guns and ammunition that were allegedly found in a house on Duncan Street, Campbelville by police.

“A thirty-two year old male and his 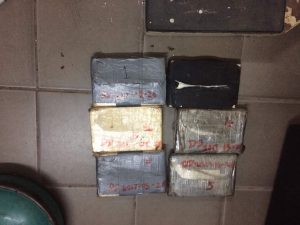 The compressed marijuana that police said they found in a house at Duncan Street, Campbelville.

thirty-one year old spouse have been taken into custody and are assisting with the investigation,” the Guyana Police Force said.

At WISROC, Linden, police said they burnt several acres of cultivated cannabis with an estimated 5,300 plants ranging in height of 6 inches to 5 feet and two make-shift camps.
That drug eradication exercise was conducted betwewn 4:30  pm and 6pm Friday. 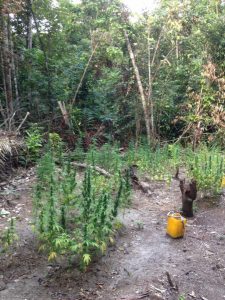 A section of a large marijuana farm at WISROC, Linden.

The lawmen said a 20-year old man from South Ruimveldt has been arrested.
Police in Lethem said a resident of that southern Guyana town was arrested Friday night on the Takatu Bridge with 70 grammes of marijuana
The police force alleged that at about 8PM, the 39-year old suspect,who was walking on the bridge, on seeing the police, quickly dropped a bag, which was retrieved and found to contain the illegal substance.
He is being processed for court, police said.