Higher oil prices not necessarily good for Guyana- US Professor 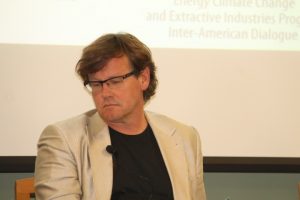 Lower oil prices may be to the advantage of Guyana which expects to pump first oil by 2020 because  high prices for the ‘black gold’ may trigger corruption by politicians, a University of California, San Diego Professor said Wednesday.

“The higher the oil prices and the more the revenues that flow into the country, the greater the risk that politics in the whole country becomes reorganized around grabbing that money for corrupt purposes rather than using it for development,”  Professor at the UCSD’s School of Global Policy, David Victor told Demerara Waves Online News.

He said there are studies that have shown that this happens in countries during high oil prices. The price of oil is currently just over US$50 per barrel, down from more than US$100 several years ago. Some experts predict that the price may be around US$80 in 2020.

He recommended moving the money “offshore”  into a Sovereign Wealth Fund that would spend the money on infrastructure over a long time rather than putting the money into the National Budget. 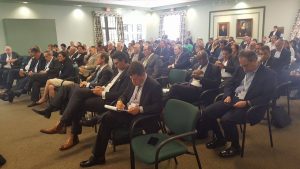 Delegates at the 16th La Jolla Energy Conference held by the Institute of the Americas at the University of California, San Diego.

Since ExxonMobil’s discovery of close to 2 billion barrels of oil offshore Guyana, the country has been laying the groundwork for the establishment of a Sovereign Wealth Fund, a petroleum commission and a national oil company.

Earlier during a session at the 26th La Jolla Energy Conference, Professor Victor said Guyana’s energy revenue management would be “helped by persistently low oil prices” backed up by discipline.

The United States (US) has been urging Guyana to spend some of its expected oil revenues on the improvement of health, education and infrastructure among other areas.

Several Guyanese media practitioners are in California attending the La Jolla Energy Conference run by the UCSD’s Institute of Americas.