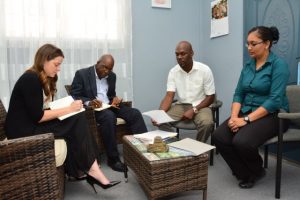 The Guyana government on Wednesday said it welcomes a donation of G$5M from ExxonMobil Guyana, which will be handed over to the Civil Defence Commission (CDC) to assist in relief efforts for flood affected areas in Cuyuni-Mazaruni (Region Seven) and Potaro-Siparuni (Region Eight).

She said that the company takes it corporate social responsibility to the citizens of Guyana seriously and added that in times of crises it is important that resources are combined to ensure a rapid response.  “We would like to support the CDC and the Regions to respond rapidly to address the needs of the affected residents. Anywhere ExxonMobil operates, including Guyana, we take our corporate social responsibility seriously and this is a situation and opportunity, where the communities are in need and we can come together and find a way to help,’ she was quoted as saying in a statement issued by the Ministry of the Presidency.

Minister of State, Mr. Joseph Harmon, who has responsibility for the CDC and disaster response and risk management, welcomed the donation and said that the Government thanks all members of the private sector, including ExxonMobil that have made resources available to the CDC to support their work.  “I want to thank all the companies for their response and for making their resources available to the Civil Defence Commission. We will ensure that whatever donations are made cater to the needs of the people. It is heartening to see everyone coming together and doing whatever they can at this time to bring relief to the residents affected and it is a culture like this that we want to promote in Guyana; where we all come together to do our best if our brothers and sisters are affected,” he said.

Acting Director General of the CDC, Major Kester Craig said that the donation will go a long way towards providing immediate relief to residents in affected areas.  “On behalf of the Civil Defence Commission and the Government of Guyana, I would like to express profound appreciation and gratitude for the timely and most appropriate intervention for bringing relief to the residents of the affected communities. I can assure you that the grant will be utilised to ensure that the most suitable needs are given to the affected,” he said.

To date, the Government has spent more than $8M on disaster response and relief activities as a result of flooding in the affected regions. This amount does not reflect donations, which have been made by private individuals and companies over the past few days.

Digicel and New Guyana Pharmaceutical Corporation are among several big businesses that have so far donated flood relief assistance.

2017-05-24
Denis Chabrol
Previous: Police to be deployed to West Demerara hospital to stem assault of doctors
Next: Higher oil prices not necessarily good for Guyana- US Professor