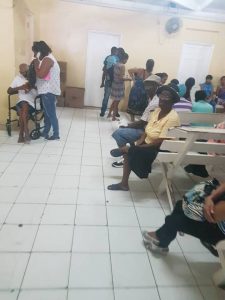 Patients and relatives waiting at the West Demerara Regional Hospital earlier this week when emergency room doctors went on strike to protest poor security at that health institution.

After emergency room doctors and other health workers at the West Demerara Regional Hospital (WDRH) downed tools earlier this week to protest poor security, the Ministry of Public Health on Wednesday announced that police would be permanently deployed at that health institution.

“These include armed ranks of the Guyana Police Force to be a permanent feature at the hospital to beef up security for doctors who have been perennially abused – verbally and physically – by Region Three (Essequibo Islands/West Demerara) residents especially when they are under the influence of alcohol or believe they have waited long enough to see a physician,” the Public Health Ministry said in a statement.

It is, however, unclear when the police would be sent to the hospital because WDRH management and the Public Health Ministry are “awaiting the approval from the Commissioner of Police.” “Region Three officials are prepared to fund this initiative of the health authority.”

The doctors ceased working on Monday and Tuesday after patients and their relatives continued to behave disorderly and assault them, despite previous assurances by Minister of Public Health, Volda Lawrence that measures would have been put in place to improve security at the WDRH. That was when a drunken patient and relatives had scuffled with doctors as well as tumbled furniture at one of the doctor’s offices. 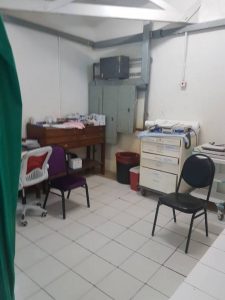 NO DOCTORS: Doctors at the emergency room of the West Demerara Regional Hospital walked off the job on Monday to pressure authorities to address deteriorating security there. The Ministry of Public Health has since said they are back on te job and a number of security measures would be put in place.

Other security measures agreed between representatives of the WDRH and the Public Health Ministry include the installation of locks on several doors “to enable doctors and nurses to better secure themselves in the face of impending assaults by irate patients or their families.”

The two sides also agreed that the number of cleaners attendants working at the WDRH would be increased, a decision that would require the approval of the Public Service Commission.

Also discussed was the need for increased salaries for doctors.

Repeated attacks include the pinning of a female doctor to a wall by an irate and intoxicated patient, leaving the health care worker “defenceless and helpless.”