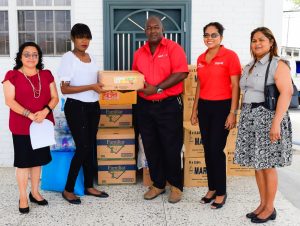 Digcel’s representatives with members of the Amerindian Peoples Association and the Civil Defence Comission at the handing over of supplies to be distributed to flood-ravaged communities in Regions 7 and 8.

Digicel (Guyana) on Wednesday handed over a quantity of supplies to the Civil Defence Commission (CDC) which will be distribuited to flood-affected residents of Region 8 (Potaro Siparuni) and Region 7 (Cuyuni Mazarauni).

The donation consists of a substantial quantity of food items from the requested list and cleaning supplies. “We empathize with those residents who have lost their livelihood and have been displaced, we hope that these items bring some sort of relief where it is needed most. We are confident that this donation will reach the residents who are in need and that our efforts and that of corporate Guyana will get to the areas that are hard hit by the recent flash flooding” Digicel’s spokeswoman Vidya Sanichara was quoted as saying in a company statement.

Ms. Laura George, Governance and Rights Coordinator and several staff members of the Amerindian Peoples Association (APA) are working with the CDC in coordinating relief efforts to ensure that this donation makes it way to the residents in Region 7 that are affected also.

Ms. George said that it is imperative that persons keep up their support and was very thankful for Digicel’s donation. “Every little bit matters, you may not be able to give in the magnitude that Digicel did today but whatever you can offer will be appreciated” said George.

Latest reports indicate that more than 3,000 residents are affected as homes, farms, roads and other areas of dwelling have been destroyed.

2017-05-24
Denis Chabrol
Previous: Guyanese woman caught with cocaine in her hair weave at Bahamas airport
Next: Police to be deployed to West Demerara hospital to stem assault of doctors