Govt is pro-business but “not transparent” about oil contracts ; Jagdeo “salivating” over oil revenues 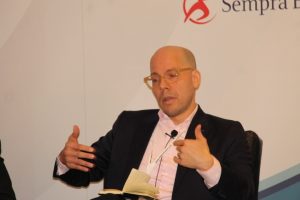 Transparency and effective planning to use massive oil revenues are among the major issues facing Guyana as the country prepares for first oil by 2020, according to a senior official of a United Kingdom-headquartered independent risk consultancy.

Speaking at the 26th La Jolla Energy Conference being held in California, Control Risks’ Senior Analyst for the Andean Region, Raul Gallegos praised Guyana for having a “government that is sending the right signals as far as respecting private property” and creating a business-friendly environment. At the same time he highlighted that concerns about transparency must be addressed.

“The problem we are seeing obviously is that the issue of transparency…,” said Gallegos, a former journalist, who noted that if after three years issues of transparency and legislative action cannot be addressed, that is “alarming.”

“We have a government that is not transparent about essentially profit-sharing contracts that it has established with a number of players, particularly the big player there-Exxon,” he told the “Oil and Gas Plenary Session: Latin America’s Upstream Prospects and Outlook”. 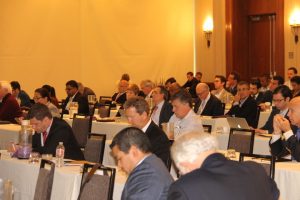 Participants at the at the 16th La Jolla Energy Conference.

Concerns have been raised in Guyana about the apparent secrecy by government and ExxonMobil in providing details about their Production Sharing Agreement (PSA). The most that has been known so far is that 75 percent of the oil production would go towards ExxonMobil’s cost of investment and operations and the remaining 25 percent of profit oil would be split equally between Guyana and the company.

Gallegos said there was also secrecy about energy sector laws that are expected to be enacted in the coming months. Government recently tabled the Petroleum Commission Bill in the House and has already signaled that it would be taken to a bipartisan parliamentary select committee. Laws on local content, the sovereign wealth fund and a national oil company are to be drafted and enacted in the coming months.

“That is certainly something that is keeping us a little bit concerned- this level of obscurity,” the Control Risks official said, adding that Guyana “has a history of weak institutions where graft is certainly well-established in previous governments so that is something that they certainly will have to deal with.”

The Senior Analyst for the Andean Region Global Risk Analysis highlighted the need for Guyana, a relatively poor country with just under 800,000 persons, to decide on how best to spend earnings from the wealth.  He noted that Guyana was considering whether to build a refinery or a huge shore-base at Crab Island at the mouth of the Berbice River.

He later told Demerara Waves the single most important decision that Guyana must make is the establishment of a sovereign wealth fund to avoid the pitfalls of neighbouring oil producing nations like Trinidad and Tobago, and Venezuela that have splurged their revenues instead of saving and spending wisely.

In the political arena, he flagged the possibility of “populism” and noted that the challenge to presidential term limits is continuing to engage the court system. Government has appealed a Guyana Court of Appeal ruling that says that constitutionally enshrined term limits are illegal because the amendment was not done by referendum

He said former President Bharrat Jagdeo, who has served two terms, appears to be engineering his return to the presidency. “…The former President Jagdeo has taken steps to make sure that the Supreme Court allows him to run again, no doubt salivating over the huge riches that are to come in 2020 when oil supposedly will start flowing and that is also the year when they will be having  the next general elections and they are going to elect a new president so there is an element of how this massive flow of riches will certainly affect the political dynamics of this country,” Gallegos said.

Jagdeo has said that he had nothing to do with the constitutional challenge to presidential term limits, and has since said that his People’s Progressive Party (PPP) would respect the ruling by the Caribbean Court of Justice (CCJ) whenever it is made.  Jagdeo has also side-stepped questions about his availability to run again for the presidency should the regional court rule that term limits are unconstitutional.

The analyst noted that the outlook on ethnic strife in Guyana “is a little bit trying” at a time when there would be massive inflows of oil revenues over the next two election cycles.

The La Jolla Energy Conference run by the University of California, San Diego Institute of the Americas brings together a wide variety of industry experts.