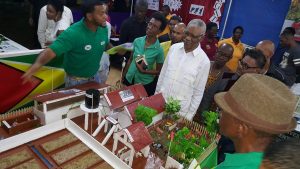 In the wake of the transfer of a nurse in Region Five (Mahaica-Berbice) following her public disclosure that a well-known pro-government official had been accessing a very strong painkiller, Minister of Communities Ronald Bulkan said people who disclose misdeeds should be encouraged.

“We cannot discourage whistle-blowers. We need to promote persons out there who are prepared, who have the courage to expose corruption wherever it may be taking place,” he told reporters on Friday at Congress Place, the headquarters of his People’s National Congress Reform.

After news broke that a nurse had written a letter complaining that Joseph had been receiving dosages of pethidine without prescription from a health institution in the region  with the blessings of a top Region Five official, the nurse was transferred.

Subsequently, Joseph resigned from the PNCR and the Region Five Council, ending many years of official association with that political party.

The transfer of the nurse, apparently under the guise that her services were needed at the other location, appears to contrast significantly with government’s desire to expose corruption and maladministration by protecting those who provide critical information.  Last year,  government began consultations on the Protected Disclosures (Whistleblower) Bill 2016 and the Witness Protection Bill.

The Minister of Communities  stressed the importance of change instead of continuity. “We cannot sweep things under the carpet. Should we do so, we are reminded by our leader that were we to adopt that approach in 2020 the carpet will be thick and we do not want that,” he said. General elections are constitutionally due in 2020.

Bulkan said he was unsure whether the nurse’s transfer was a direct result of her speaking out against the provision of pethidine to Joseph.