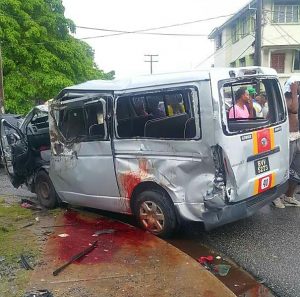 An unidentifief man was Sunday afternoon killed and several others injured in a smash-up involving a minibus and a Tacoma pick-up.
An eyewitness said the dead man’s teeth were on the ground and his neck was barely hanging on.
Persons at the scene said the minibus, Bvv 5273, was traveling east along D’urban Street, Georgetown when the pick-up, GRR 8350,  that was heading south along Smyth Street struck the bus
The bus turn over and crashed into a parked car outside Classique Sports Bar.
Up to late Sunday night, police did not issue a statement on the accident.
The injured were rushed to the Georgetown Hospital for emergency treatment.