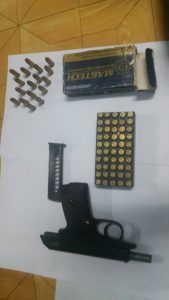 A  41 year old businessman of Helena # 1, Mahaica, East Coast Demerara was Saturday afternoon arrested with an unlicensed .32 Pistol, fifty  .32 and seventeen  9 MM live ammunition, the Guyana Police Force said in a statement.
Police ranks acting on intelligence swooped  down on the suspect’s home about 22:55hrs and conducted a search, during which the illegal weapon and ammunition were found in his bedroom,” the law enforcement agency said.
Police alleged that shortly after, the suspect’s 40 year old wife went to the Mahaica Police Station where she offered a bribe of GYD $525,000 to one of the investigating ranks to forego the charges against her husband.
She has since been arrested and the money lodged, police added.
Both are being processed for court.