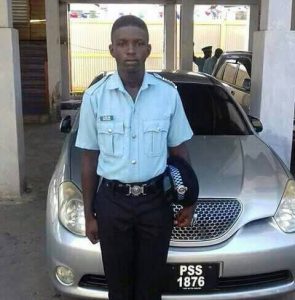 Police are investigating a fatal accident which occurred about 11:30h Sunday on the Success Public Road, Leguan, Essequibo Island.

Dead is Police Constable 23238 Shaqiel Woolford, 20 yrs., attached to Leguan Police Station and of 12 Catherine, Mahaicony, East Coast Demerara.
Enquiries disclosed that Constable Woolford was proceeding east along the road on Motor cycle CH1860 when another motor cycle  CH4564 driven by a 44-yr. old Phoenix, Leguan resident, rode out of a yard from a northern direction into the path of the policeman.
As a result of the impact Constable Woolford, fell and received injuries to his face and head.
He was rushed to the Leguan Cottage Hospital in a conscious state where he was treated and referred to the West Demerara Regional Hospital but succumbed on his way to that institution.
The body is at the Ezekiel Funeral Home awaiting a post Mortem.
The cyclist is in custody.