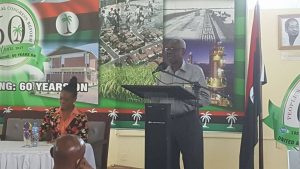 PNCR General Secretary Oscar Clarke addressing the launch of a programme of activities to mark the 60th anniversary of his party.

“Dare I say, our present leader has taken that mantle and is carrying forward the ideas of Burnham today because they are relevant to what is happening in this country even now,” Clarke said at the formal launch of activities to celebrate the PNCR’s 60th anniversary.

Burnham is admired by some for, among other things, promoting self-reliance, having a strong foreign policy, political shrewdness but his detractors say his administration retained power by rigged elections, banned or restricted basic food items and crushed political opponents by killing them and violating press freedom.

Clarke recalled that the People’s Progressive Party (PPP) split in the 1950s into the Burnham and Cheddi Jagan factions over the latter’s insistence on pursuing the ideological path of communism. Burnham, according to Clarke, preferred socialism that was suitable to Guyana’s development objectives.

The PNCR General Secretary noted that everything that Burnham has said as far back as 1955 “we are seeing now coming back to us as if they were never said before.” “Everything he said then we are seeing it happen in Guyana today and we who are the present leaders- the present comrades in the struggle to build Guyana- must recognise that were it not for this foundation laid by Linden Forbes Burnham we would not have the privilege that we have today,” he said.

PNCR Chairman, Basil Williams argued that since the embryonic years of the PNC, its founder-leader has described that political organisation as one of protest and struggle against corruption, misrule and narrow partisanship- similar challenges Williams said Guyana had endured under the PPP between 1992 and 2015. “Comrades, but doesn’t that strike a bell about how prophetic this man was  since sixty years ago. What is our main beef now? Isn’t it corruption? It is! Misrule, partisanship. That’s twenty-three years of that we inherited and is only now people getting locked up,” he said. Six PPP supporters, who were Directors of the Guyana Rice Development Board, were Friday arraigned on fraud-related charges and each was granted GYD$500,000 bail pending trial. 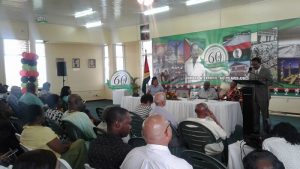 With the PNCR being the largest party in the coalition of A Partnership for National Unity+Alliance For Change (APNU+AFC), they clinched a one-seat victory at the May 2015 general elections.

Clarke recalled that ahead of those polls, there were many criticisms about the PNCR coalescing with other parties, but he noted it was the same way that the PNC had come to power in 1964 when it had coalesced with the capitalist-oriented United Force led then by businessman, Peter D’Aguiar. “Burnham, to get independence for Guyana, joined with Peter D’Aguiar and went to London and Peter D’Aguiar…but he was being consistent and relevant- Independence for Guyana was the grand objective,” said Clarke.

Historical documents  released by Britain and the United States in recent years have confirmed that at the height of the Cold War the US had persuaded Britain not to grant political independence to Guiana under Cheddi Jagan for fear that he would have turned Guyana into a communist satellite state of the Soviet Union second to Cuba. Instead, the West had preferred Guyana to be granted independence under Burnham, a moderate.

Under the theme “United and Strong, 60  Years On,” the PNCR’s activities will include fund-raising, education and awareness, a membership drive, medical outreaches, establishment of a Congress House on the East Bank Demerara,  rehabilitation of party offices, symposia, party history lecture, and an awards ceremony for party stalwarts.

The PNCR’s Chairman listed several achievements in the areas of health, education, infrastructure, women’s rights and youth development since the party was founded in 1967.

In terms of achievements since the PNCR returned to power in a coalition with other political parties, Williams said they included increases in public servants salaries by 37 percent, increase in the minimum wage from GYD$39,540 to GYD$55,000 reduction of the Value Added Tax from 16 percent to 14 percent, 45 percent increase in Old Age pensions from GYD$13,125 to GYD$19,000 and  a GYD$644 million housing subsidy for Regions 1 and 9.

He also listed the holding of local government elections for the first time since 1994, creation of more towns,  establishment of the Public Procurement Commission, aggressive diplomatic campaign to protect Guyana’s territorial integrity, and the rehabilitation of roads and bridges as other achievements since 2015.