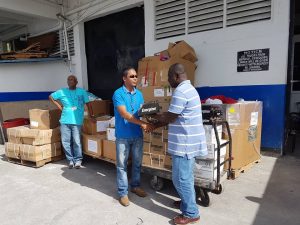 Food for the Poor handing over a quantity of relief supplies to a representative of the Amerindian People’s Association (APA).

Guyana’s Civil Defence Commission (CDC) said emergency supplies are being dispatched to six flood-stricken villages in Region 8 (Potaro-Siparuni) and the Public Health Ministry would be moving to curb an outbreak of diarrhea in one of the communities, government announced.

“A total of three flights with supplies were dispatched today to Chenapau and Orinduik. The CDC is establishing a Forward Operations Centre at Orinduik, from where relief supplies and flood kits will be transported by boat to the affected villages which are inaccessible by air.

An additional four flights with food and relief supplies will be dispatched to Chenapau and Orinduik tomorrow, Saturday May 20, according to a statement issued through the Prime Minister’s office.

Following is a list of items which are required:

The flood has been caused by excessive rainfall in the south and southwestern parts of the region in recent days. In addition, the Ireng River has over-topped its banks in some areas north of Orinduik.

The CDC says it has conducted an aerial reconnaissance of the affected areas. “There have been no reported deaths, missing persons or serious injuries. However, the Ministry of Public Health has received reports of some cases of diarrhea in the village of Chenapau.

Sand Hill Settlement – The village is under approximately 25 feet of water. Five houses have washed away and ten houses are under water. Population – 60 persons

Waipa – 95% of the village is flooded and under water at varying depths from 5 feet to 15 feet. Population – 423 persons

Kaibarupai – The village is under approximately 10 feet of water. Two houses have washed away and the health post, church and cemetery are all under water. Population – 200 persons

Itabac and Kanapang – details to be provided in subsequent update.]

Reports from the region are that the village of Kaibarupai has not suffered flooding previously while the level of flooding in other villages far exceeds previous situations of minor flooding. The villages are located mainly in valley areas where the water from the excessive rainfall pooled and resulted in the excessive flooding. Villagers have relocated to higher ground in close proximity to the various villages.

Minister of State Hon. Joseph Harmon Friday convened an emergency meeting at the Ministry of the Presidency with Minister of Communities Ronald Bulkan, Minister within the Ministry of Public Health Dr. Karen Cummings, Director General of the CDC Col. Chabillal Ramsarup, Region 8 Regional Chairman Mr. Bonventure Fredericks and other agencies to coordinate the government’s response which is being led by the CDC.

Min. Harmon was quoted as saying that “the government deeply empathizes with the residents who have suffered losses and dislocation as a result of this very unfortunate and unusual flooding. The government commits all the necessary resources to ensure that relief is brought to every single resident in every affected community.”