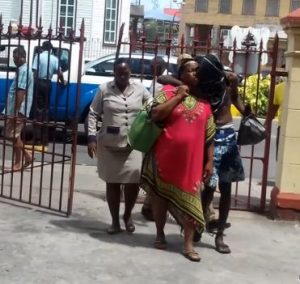 A mother and her son were Friday arraigned on charges of illegal gun and ammunition possession and possession of narcotics for the purpose of trafficking.

Appearing before City Magistrate, Leron Daly were Gail Joe and her son Kevin Amos both of whom reside at 43 Norton Street, Lodge, Georgetown.

They were jointly charged with having one .38 round of ammunition in their possession while not being the holders of firearms licenses on May 16, 2017.

Police further alleged that on the same day they had 3.5 grammes of marijuana in their possession.

Amos pleaded guilty to both charges while his mother pleaded not guilty and was released on a total of GYD$140,000 bail with her next court appearance set for June 2, 2017.

Meanwhile, Amos also pleaded guilty to charges of possession of an unlicensed firearm and ammunition.

The prosecution’s facts are that  on May 16, 2017 at Hardina Sreet, Wortmanville, Georgetown  he had one .32 pistol and four rounds of .32 ammunition while not being the holder of a valid firearm license.

Magistrate Daly sentenced him to two years in jail on the charges of possession of unlicensed firearm and ammunition and fined of GYD$45,000.

On the narcotics charge he was fined GYD$3,000.