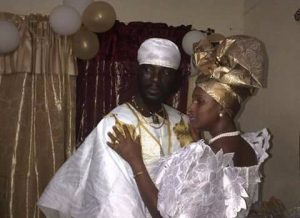 Shamika London and her husband.

The man, who allegedly stabbed to death his wife, was Friday afternoon captured but not before he was shot because he allegedly attacked police, the Guyana Police Force said.

“During the ensuing process of effecting the arrest, the 35 year old pork-knocker who violently attacked the ranks, was shot once to his left leg,” the law enforcement agency said. His condition was listed as “conscious and stable.”

Police said the man, who allegedly killed Shenika London, was arrested at about 4:45 Friday afternoon in the jungle of Moblissa, Soesdyke/Linden Highway.

Gordon, a clothing vendor and mother of five, was Friday morning stabbed to death at her home at 1206 Central Amelia’s Ward, Mackenzie, Linden.

A blood-stained knife suspected to be the murder weapon, was found at the scene, investigators said.

“About 10: 30 hrs, the victim drenched in blood, ran across to her neighbour for assistance but collapsed outside of the yard. She was rushed to the Mackenzie Hospital by neighbours where she was pronounced dead on arrival.

The body which bore multiple stab wounds, is presently at the hospital’s mortuary awaiting a post-mortem examination,” police said.