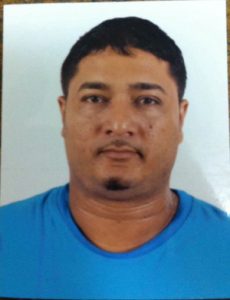 A suspected con artist from Trinidad and Tobago has been arrested and is to be prosecuted for a number of offences before he is deported to his home country, police said.

The Crime Chief said since Ali’s arrest at Ogle, East Coast Demerara,  the Guyana Police Force has informed its counterparts in Trinidad. Blanhum said steps are in train to deport the man. “Two charges will be instituted shortly against him and after the charges he will be promptly deported and handed over to the authorities in Trinidad and Tobago,” he said.

Sources said Ali has been posing as a consul of the United States Embassy with the alias and was collecting fees to grant American visas.

He has been in Guyana since 2014 during which time he has conned numerous persons of their personal property, cash and rental of premises.

2017-05-22
Denis Chabrol
Previous: “We cannot discourage whistle-blowers”- says Bulkan on transfer of nurse who exposed PNCR Councillor’s access to painkiller
Next: GINA staff paid in 2015 with money released in 2016: auditors called in again