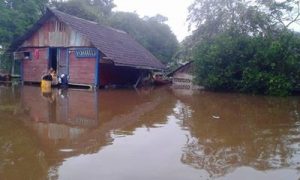 Hundreds of residents in scattered villages in Region 8 (Potaro-Siparuni) are facing a “grim” situation as a result of severe flooding due to heavy rainfall, a reconnaissance mission conducted Thursday by  Guyana’s Civil Defence Commission (CDC) revealed.

He said six 600 persons have been affected in five villages, among them being Kaibarupai, Sand Hill, Chenapou and Waipa.

Ramsarup said after the aerial inspection of the area, CDC officials would be meeting with officials of the Guyana Defence Force (GDF) to map a strategy to dispatch supplies to the residents.

Ramsarup said CDC officials flew over the affected areas aboard a SkyVan aircraft but were unable to land at any of the nearby airstrips. He said aerial views of the flood-affected villages show that houses located in the valleys are under several feet of water and at least one of them has been washed away.

“I sent in a reconnaissance mission in there and they did report very high water- between 12 to 18 feet of water in some places. A number of houses have been washed away, some are under water and farms are damaged,” he said.

The Amerindian People’s Association (APA), however, disputed claims that one of the airstrips could not have been used. “The APA received word from the Toshao of the village that a sky-van was sent there to assess the situation however it did not land and only did a fly by. The airstrip is NOT under water and is still functional according to the Toshao. We will continue to provide updates on the CDC’s action and the villages affected as we get them,” the association said on his Facebook Page.

The APA said in Waipa about 10 houses have been washed away and more than 20 others are under water. Kaibarupai is hit harder with a landslide causing the Ireng River to sweep away their belongings, and their Health Centre is flooded with about four feet of water, the organisation said.

The APA said both villages are in need of urgent assistance.

Ramsarup said there were no reported injuries or deaths, but residents would obviously need emergency supplies of food, drinking water, blankets, clothing, tents and other items. Hopeful that rainfall would ease for the next two days, as has been forecast, the CDC boss said that would allow for smaller aircraft to land with the items.  “The good thing about it and I had a prediction from Hydro-met which says that the situation will remain the same for another three days which will give the water an opportunity of moving away,” he said.

Also being explored, he said, is the transportation of the supplies by boat from the airstrip to the affected villages.

He said the CDC would be consulting with the GDF about the possibility of landing larger aircraft at Paramakatoi and shuttling the supplies to the villages. The Director- General said Food For The Poor has also promised to provide relief items.

Minister of State, Joseph Harmon said President David Granger was informed of the situation and, “has given certain directions to the CDC, and to the regional administration for actions to be taken, and the support which the government is going to give to the residents who are affected by the flooding.”