Building a US$5 billion oil refinery in Guyana unprofitable — expert 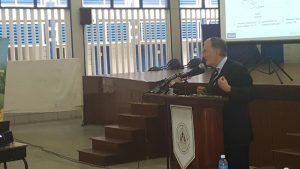 The cost of building a brand new 100,000 barrel per day oil refinery in Guyana can cost up to US$5 billion with a negative rate of return on investment at between US$2 billion and US$3 billion, a consultant said Wednesday.

Director of Advisory Services at the United States-based Hartree Partners, Pedro Haas’ findings and assumptions were based on Guyana’s daily demand of between 13,000 and 14,000 barrels per day. Haas was hired by the Guyana government through the New Producers Group of the British-based international think-tank, Chatham House. 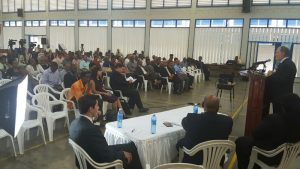 Pedro Haas delivering the results of a desktop feasibility of building an oil refinery in Guyana.

He said building a refinery with a capacity of 200,000 barrels per day – a “massive investment”- would far exceed Guyana’s demand.

Instead, he explored with the audience a 100,000 barrel per day capacity. “You can’t bring it down lower than that because of the cost of the off-site,” he said.  He said construction could take at least 60 months.

Adding the cost of the off-site location and its facilities such as electricity generation, hydrogen supply, water and docking would double the total cost to the US $5 billion figure.

He calculated that the cost of constructing a new refinery would be at US$25,000 per barrel.

Responding to a question by Geologist Evanradhay Persaud about the feasibility of establishing mini refineries, the consultant said that, too, would be expensive. “I don’t know that you would build a new refinery with all the ancillary facilities that you need will be a profitable event,” Haas said at the public consultation organised by the Ministry of Natural Resources and held at the Marian Academy auditorium, Carifesta Avenue, Georgetown.

The international oil expert, who has worked in the private sector and government, also took into consideration the cost of oil at US$46.50 per barrel. “This is a number that is going to vary on a day to day basis,” he said. Also considered are the facts that the United States has been exporting a lot of cheaper shale oil and liquified natural gas and international price projections.

He suggested a number of alternatives to the construction of a refinery in Guyana. They include selling all of Guyana’s crude and in turn importing supplies, swapping crude for oil products, or reaching an agreement with a refinery  to have a “certain slate of products” returned at an agreed place.

Touching on the fact that oil refineries in St. Croix, Aruba and Curacao have been closed down during the past several years, Haas said “that tells you something” about the viability of building a brand new, state of the art facility.

The Hartree official, however, said if the private sector is willing to risk investing in the construction of a refinery, government should not object if a state subsidy would not be required.

ExxonMobil intends to extract 100,000 barrels per day from its Liza field offshore Guyana when production begins in 2020.

Trinidad and Tobago’s Prime Minister, Keith Rowley recently flew to Texas where he is said to have lobbied ExxonMobil to refine its oil from Guyana in his country.

Trinidad and Tobago’s state oil company, Petrotrin, has excess refining capacity and has been refining crude from several other countries.

2017-05-17
Denis Chabrol
Previous: Hotskull charged with murder of footballer
Next: Construction of oil refinery in Guyana will be a political decision