Construction of oil refinery in Guyana will be a political decision 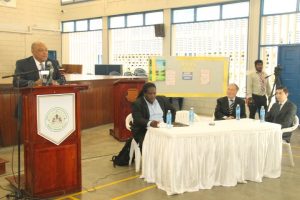 Minister of Natural Resources, Raphael Trotman addressing the public consultation on the feasibility study on establishing an oil refinery in Guyana. Seated at the table (left to right) are Permanent Secretary of the Ministry of Natural Resources, Joslyn Mc Kenzie; Consultant, Pedro Haas and his assistant.

Minister of  Natural Resources, Raphael Trotman Wednesday night said the Guyana government would have to consider the social benefits of the construction of a US$5 billion refinery or a smaller facility like in neighbouring Suriname.

He said Cabinet would have to study the findings and recommendations contained in the desktop feasibility study conducted by Director of Advisory Services at the New York-based Hartree Partners, Pedro Haas.

Trotman said one of the key considerations would be the creation of jobs. “There are refineries in other parts of the world which may not be turning an economic profit but they provide other benefits,” he told reporters after listening the Haas’ presentation that focused on the financial and economic viability of setting up a facility here.

The Hartree official said a minimum 100,000 barrel per day oil refinery- taking into consideration Guyana’s daily needs of about 15,000 barrels- would cost US$5 billion including the associated on-site infrastructure such as power generation, hydrogen, water treatment, tanks, a steam co-generation plant, docking and other facilities.

Noting that the US$5 billion price tag, the Natural Resources Minister said he was not yet sure whether the size of the facility could be scaled down and if prospective investors in a refinery would be willing to go ahead with some incentives by the government “without, of course, ensuring that we don’t have a white elephant.”

In delivering closing remarks, the Minister of Natural Resources noted that a political decision would have to be made about whether a refinery should be built here and suggested that local oil demand would most likely be reduced because of the expected increase in renewable energy and liquefied natural gas.

“While we use numbers of 15,000 barrels per day we are also committed to going green- that is developing hydro-power, solar and possibly wind so we have to look at that… and we have discovered, along with the oil, a deposit if natural gas which is going to brought onshore to provide some energy so we will look at the 15,000 barrel per day factor but is going to change if we put the gas into generation to replace the heavy fuels that GPL (Guyana Power and Light) uses or if we put it into industry only, we are going to see a change in those numbers,” he said.

The Hartree Partners official cautioned against reducing the capacity of the oil refinery to less than 100,000 barrels per day, saying that the “very high infrastructure cost” for on-site facilities would worsen the viability of the project. “If you have a very high infrastructure cost, the fact that you scale down hurts the project instead of helping it…You are going to need all sorts of ancillary facilities around the refinery to make the refinery viable.

The consultant, who was hired by the Guyana government through the New Producers Group of the British think-tank, Chatham House, told a packed Marian Academy auditorium that other reasons that influenced his findings of an unprofitable refinery in Guyana included the projected price of crude oil at US$46.50 per barrel- little chance of oil climbing to US$100 or more per barrel in the coming years- the fact that there are many other refineries in the Atlantic Basin and the United States has been exporting cheap shale oil and liquefied natural gas.

The public consultation on the feasibility report of establishing an oil refinery in Guyana was attended by a wide cross-section of Guyanese from business, academia, politics, engineering and other interest groups.

Speaking from the floor, Rajendra Bissessar highlighted the importance of the Guyana government investing in an oil refinery at zero profit because between 3,000 and 6,000 persons would be employed and more than 100 by-products including fertiliser would be produced. “We are talking about by-products and we have to ask ourselves how long Guyana will continue to be an exporter of raw material rather than going to value added,” he said. Bissessar also suggested that the Guyanese diaspora could invest in such a production facility.