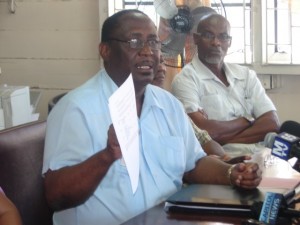 Patrick Yarde on May Day made a thinly veiled claim that he and his team won last Thursday’s elections and they were not about to give up power any time soon, in the face of claims by his rival, Gregory Gaspar,  and team that they were closing in on victory to take over the leadership of the Guyana Public Service Union (GPSU).

“It is clear to your Union’s leaders that we are faced with a situation to defend ourselves from an attacking element that we helped to create in the fight for justice, however unfortunate,” said the GPSU President in a May Day Message issued late Monday afternoon on behalf of himself and the Executive Council. Yarde did not say what form the defence would take.

Demerara Waves Online News did not see Yarde at the May Day rally held at the National Park. He was also not at the union’s headquarters when President David Granger stopped by.

The Elections Officer, Herman De Souza is yet to declare official results in the elections that were held last Saturday at several locations across the country.

Yarde, in his May Day message, charged that efforts to dislodge him and his executive were politically motivated. H did not name anyone or organisation that he believed was behind the Gaspar’s change team.

“While we were alerted and sensitive to certain irritants, we eventually recognized there was a massive political and other involvement in our elections process with a clear and determined assignment to create multiple divisions in the rank of our members and to discredit and decapitate the leadership of the Union,” said Yarde who has been at the helm of the union for the past 30 years.

The Ministry of the Presidency, on its Facebook page, acknowledged that Gaspar is the new GPSU President. “President David Granger and his team which includes Attorney General, Mr. Basil Williams, Minister of Social Protection, Ms. Amna Ally, Minister of Labour, Mr. Keith Scott, Minister within the Ministry of Public Infrastructure, Ms. Annette Ferguson and Minister within the Ministry of Finance, Mr. Jaipaul Sharma, visited the GPSU headquarters where he met with members and newly-elected President, Ms. Gregory Gaspar.”

The GPSU President again accused his opponents of misleading and threatening members, disrupting the counting of votes and undermining the credibility of the election process after they failed to stop the holding of the polls.  “The instances of unprofessional, unethical conduct, overwhelming dishonesty and a vicious campaign to dislodge the serving leaders were evident and abominable.”

For their part, the Gaspar-led team have claimed that Yarde’s supporters stuffed ballot boxes in his favour, disenfranchised members from voting  and the Elections Officer has failed to provide statements of polls, tally sheets and voters lists to reconcile the votes cast. Police were called in twice after Gaspar’s supporters demanded that the ballot boxes remain in the open rather than be taken in an office.

Expressing confidence that he and his Executive Council could “overcome this unwarranted assault,” he listed several areas that the GPSU would be addressing in the coming months. They include continuing the struggle for sweeper-cleaners to have full employment and security of tenure and achieving true collective bargaining for increased wages and other financial benefits. “We shall not surrender and will continue to struggle for a living wage, de-bunching, increments, adequate allowances and other appropriate and enlightened conditions of service,” he said. “We will hasten to conclude negotiations for payment of gratuity for contract workers while on maternity leave and paternity leave for fathers.”

The GPSU President promised that and his executive would continue to press for negotiations for a revised Pension Act,  the resuscitation of a vibrant women and youth committees and continue to demand the resumption of meetings with the Permanent Secretary, Department of the Public Service, Office of the Presidency, in accordance with the legally binding Agreement for the Avoidance and Settlement of Disputes.

Other targets that Yarde has set himself and his executive include resolving all grey areas where the transition from contract employment to permanent pensionable employment resulted in any loss of benefits to the recipients, demanding the resumption of monthly meetings with the Permanent Secretary, Department of Public Service and Office of the Presidency, enhancing repesentation for members generally, upgrading all other existing Collective Agreements and improve the efficiency of the process, and pursuing more vigorously the completion of all outstanding recognition by the Trade Union Recognition and Certification Board.

His team, he says, will establish a broad base, efficient communication strategy and general training programmes with members, restore their education programme to improve member’s academic base in pursuit of higher learning, resuscitate their our housing drive for members and vigorously pursue their daycare and childcare campaign to afford mothers and fathers and others access to these facilities and review and implement recommendations from our Institutional Strengthen and Capacity Building Project.

“In eliminating the obstacles in our way, we must mobilize now to confront the existing injustices in order to etch out a future that is built on fairness, justice and human rights. As a public-sector union, we recognize and are confident that we are integral to the foundation of a just and democratic society and that our fight is a fight for all,” he said.