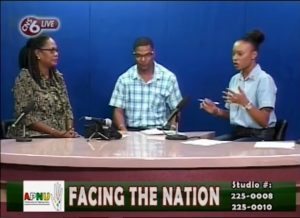 Gregory Gasper, the man leading Team Change to challenge Patrick Yarde for the GPSU’s Presidency Tuesday (May 2, 2017) distanced himself from a Ministry of the Presidency’s social media missive which labeled him newly elected President of the Guyana Public Service Union (GPSU).

Gasper, in an invited comment, told Demerara Waves, he is unsure as to where the Ministry of the Presidency was getting its information from which would lead to such post since the release of thee results have not been made.

Following the May Day Rally yesterday, Head of State, David Granger led a ministerial delegation on a visit to a number of union halls.

Speaking to Demerara Waves on Tuesday, Gasper also denied any allegations of political involvement in support of him in his bid to oust Yarde as President. 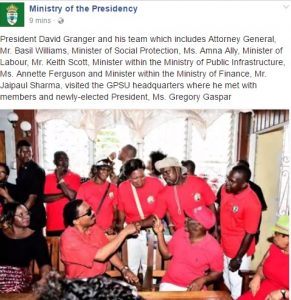 Yarde, in his May Day message, charged that efforts to dislodge him and his executive were politically motivated. He did not name anyone or organisation that he believed was behind the Gaspar’s change team.
“While we were alerted and sensitive to certain irritants, we eventually recognized there was a massive political and other involvement in our elections process with a clear and determined assignment to create multiple divisions in the rank of our members and to discredit and decapitate the leadership of the Union,” said Yarde who has been at the helm of the union for the past 30 years.

Only recently supporters of the Gasper’s Team Change were openly given a platform by the coalition A Partnership Unity (APNU). Karen Van Sluytman Corbin and Jermain Hermanstyne—two of Gasper’s more vocal supporters were facilitated on the APNU’s ‘Facing the Nation’ programme hosted by Ministry of the Presidency’s public relations operative, Malika Ramsey.

However, Hermanstyne denies that the government has been playing a role in he GPSU’s politics. “I want to make it very clear. The government of the day as well as the President are decent people and we will not allow Patrick Yarde to try to drag the government into what is happening right now. What is happening right now is a plea for justice. This is why we want to ensure we take back our union. This is bigger than Patrick Yarde and we are not going to allow our government to be dragged into this,” he said on a second “Facing The Nation” programme after the elections.

Ramsey said the television programme is open to anyone including Yarde and she contacted the GPSU members to appear. “Facing The Nation” is open so Mr. Yarde if yourself and team want to come here to bring your position, if your position is different from this team, I have no problem with that,” she said. Ramsey had planned to invite Yarde to appear on the programme.

The People’s National Congress Reform (PNCR), the largest partner in the APNU, has historically had a very close relationship with the GPSU. While in power, the People’s Progressive Party (PPP) had sought to weaken that union by stopping automatic check-off of union dues and hiring government employees on contract.

Today (May 2, 2017) is Day six since the voting and tallying of the 3,000 votes cast began on Thursday last at the close of polls.

Members of Team Change are currently camped out at the GPSU’s Headquarter along with Elections Officer Herman DeSouza as the stand-off continues into its sixth day over the locked Ballot Boxes and statement of polls.
At present the results of only seven of the 19 ballot boxes have been released.

An unofficial calculation shows that from the seven results Gasper was at that time leading 542 to 155.
According to information garnered by Demerara Waves, Yarde lost the votes in the West Brickdam area 39/16, Brickdam, 64/21, Guyana Revenue Authority’s wharves 44/24, the Palms, GGMC, Lands and Surveys and Ministry of Health 261/7, GRA’s Head Office 96/16.

For his part, Yarde plans to hold on to power and has listed several issues that are facing workers that he and his executive plan to address in the coming months. “It is clear to your Union’s leaders that we are faced with a situation to defend ourselves from an attacking element that we helped to create in the fight for justice, however unfortunate,” said the GPSU President in a May Day Message issued late Monday afternoon on behalf of himself and the Executive Council. Yarde did not say what form the defence would take.