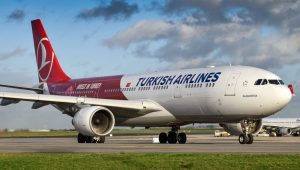 (AVIATIONPROS.COM) May 01–PANAMA CITY, Panama — An agreement to operate joint flights was signed on Friday between Star Alliance members Copa and Turkish Airlines, and is a major game changer for the travel industry of Latin America and the Caribbean.

This is especially important to Guyana, a country very much isolated from global hubs. Now travelers can fly Copa Airlines from Guyana to Panama City and connect with Turkish Airlines’ vast global network to cities in Africa, Europe, Central Asia, the Middle and Far East.

Through this code-sharing agreement, these two top global carriers will offer passengers seamless connection from 74 destinations in Latin America and the Caribbean, including Guyana, four times a week to 226 international destinations in Europe, Africa, the Middle and Far East and Australia on the Turkish Airlines network.

Turkish Airlines (THY), a state owned company, operates 337 aircraft and has been chosen as Europe’s best airline for the past six years by Skytrax survey.

A codeshare agreement allows two or more airlines to list certain flights in a reservation system under each other’s names. This means, for example, a businessman from Beijing or Dubai can reach Guyana via Istanbul and Panama City, and luggage check to the final destination seamlessly, subject to government approvals.

In 2018, Turkey will open one of the iconic airports in the world that will rival those in Doha, Abu Dhabi, Dubai, and Singapore, with six runways, capable of handling 200 million passengers. This project will cost the Turkish government about US$7 billion. It will replace the Ataturk Istanbul Airport, which still offers passengers many comforts, easy and frequent connections via Istanbul.

Guyana on the other hand, by the end of 2017, will finally complete the modernization and expansion of its Cheddi Jagan International Airport after many delays and setbacks. More significantly, since the discovery of major oil reserves off the shores of Guyana, its aviation and tourism industries are poised to grow if there is sound planning and transparency.

Guyana can easily surpass Trinidad and Tobago in becoming a hub between North and South America, the Caribbean and Africa if its oil wealth doesn’t end up in the pockets of corrupt officials and their families. Since independence in 1966, Guyana has been plagued by corruption and ethnic politics.

The modernization and expansion of the Cheddi Jagan Airport will cost the government of Guyana about US200 million; however, the current government is yet to bring a reputable airline to Guyana. This is due to the lack of a bold and ambitious growth plan for CJIA. Making it more challenging for the government is the fact that Guyana is a small and insignificant market, with poor aviation and transportation infrastructure. But the government is trying to address the issue.

To grow CJIA, aviation experts recommend that Guyana revive a national airline or give generous terms to an international company with the finance and expertise to station some planes at CJIA.

The only global carrier that serves Guyana is Copa Airlines. Trinidad and Tobago’s Caribbean Airlines (CAL) has served Guyana for more than 60 years. However, Guyana has found it hard to attract reputable international airlines. For the past ten years, there have been efforts to bring JetBlue to Guyana but that is not progressing. More recently, two small and unknown companies, Flyallways and Easy Sky, have experienced difficulties.

The Guyana Civil Aviation Authority hopes that Easy Sky will remedy several safety issues before it is given the go ahead to resume regular flights to and from Guyana.