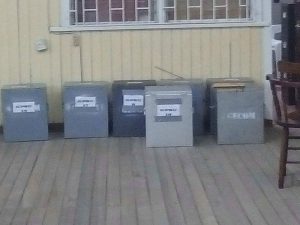 Counting of less than 3,000 votes in Thursday’s election for a new executive of the Guyana Public Service Union (GPSU) is yet to be completed, sparking off allegations of voter fraud in one of the most keenly contested elections for the first time in years.

Supporters of the Change Team are said to be keeping vigil outside the GPSU’s headquarters on Regent Street and Shiv Chanderpaul Drive (formerly New Garden Street) to ensure no one enters the building where the ballot boxes are being stored.

At stake is the dislodging of Patrick Yarde from the helm of the GPSU for the first time in 30 years, after a string of media battles and legal actions between his team and the other one led by Gregory Gasper who chairs the union’s branch at the Guyana Geology and Mines Commission.

Smelling victory with good showings at the Guyana Revenue Authority and the Georgetown Public Hospital Corporation (GPHC), Gasper now believes that he and his team’s hopes of taking over the leadership of the union are fading due to alleged electoral fraud. “Right now, we are not willing to accept the results because we feel it was compromised. Everything was going well and they would have been tracking the numbers and they knew they were behind so this is what is the effect of that- of being hungry for power, knowing that you will be out and this is what transpired today,” he told reporters. “The whole election process has been compromised so whatever happens , we are not going to accept it. The whole process and the stalling of this is to ensure that I don’t win,” he said. 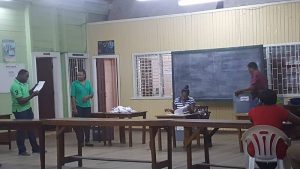 The counting of votes at GPSU’s headquarters that was suspended at about 11 O’clock Thursday night. Counting may resume on Saturday.

From late Thursday night, Gasper’s team has been claiming disenfranchisement and the stuffing of ballot boxes in areas such as Linden, West Coast Berbice and the New Amsterdam Hospital and Psychiatric Hospital in East Berbice. He claimed that ballot boxes have been stuffed in certain areas, a reason he believes that the voters’ lists cannot be handed over to him despite his requests.

He claimed that several ballot boxes arrived unaccompanied,  were handed over to the security guard at the door and taken upstairs where several pro-Yarde persons were present.

Not all ballots are counted at the place of poll. Some boxes are moved to several government departments before they are eventually transported to the union’s headquarters for centralised counting.

Concerns about alleged electoral irregularities have not been helped by the fact that counting of the votes at GPSU’s headquarters was suspended 11 O’clock Thursday night until Friday after only one box was counted. Initially, they were told that counting would have resumed next week Wednesday but Karen Vansluytman, who is part of Gasper’s team, said they were told by Elections Officer, Herman De Souza that a few persons would be mobilized to continue counting at about 9 O’clock Saturday morning.

Gasper said De Souza told them late Friday afternoon that no one was available to count the ballots. 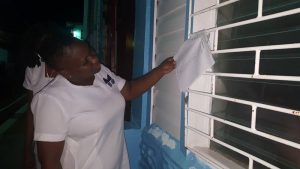 He said he and several other supporters kept watch overnight outside the union’s office to ensure that no one tampered with the several ballot boxes that were borrowed from the Guyana Elections Commission (GECOM).

Van Sluytman said Yarde summoned police to the union’s headquarters during the predawn hours of Friday to order the removal of Gasper’s supporters from the union hall, but in the end she said even Yarde and his group also had to leave.

Minister of State, Joseph Harmon said government was in contact with the union and would eventually resume negotiations for salaries and benefits. The administration appears to be awaiting the outcome of the GPSU’s elections.

2017-04-28
Denis Chabrol
Previous: Man charged with murder during brawl over filling water bottles
Next: US$30 million loan being redirected from road to housing development