US$30 million loan being redirected from road to housing development 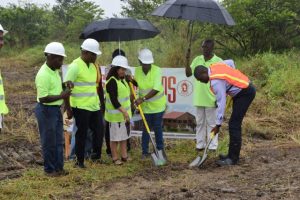 Parts of a loan fund raised originally for a road rehabilitation programme by the previous administration is now being re-shifted to the housing sector for its expansion, Finance Minister Winston Jordan announced.

The Government Information Agency (GINA) reported that Jordan said government is working with the Inter-American Development Bank (IDB) to re-programme the housing sector’s over US$30 Million from a loan approved in 2012, under the previous administration.

The Finance Minister  who was at the time addressing the official launch of the Ministry of Communities’ Housing Solutions 2017 and Beyond, programme at Perseverance on East Bank   Demerara (EBD), explained that the loan was for a road rehabilitation programme that  included the upgrade and widening of the Sheriff Street/Mandela Avenue.

He explained that this loan has been plagued by a number of problems, resulting in an extremely poor rate of disbursement.  Further, the life of the loan will end in March 2018, resulting in the loss of significant concessional resources.

The Minister said that instead of facing the loss, the government has decided to re-programme the funds to expand the housing sector, as part of developing new revenue sources for the industry.

The more than $30M will augment the $5 Billion that is expected to be spent in the sector this year, realising the first phase of the Housing Solutions 2017 and beyond programme. Further the money will serve to offset some of the housing supply shortfall, that the country has been experiencing, the minister said.

Jordan added that the, “housing supply in Guyana has not  kept pace with underlying demand.”

He said that the accumulated shortfall was due to factors such as the restrictions on the supply of available land for housing, the lack of financial resources, lack of coordination between infrastructure planning and housing supply, and skills shortage in the housing and construction sectors.

“The impact of the housing shortfall is real….the number of people experiencing housing stress is increasing,” the minister was quoted by GINA as saying.

Solving this critical situation represents a big challenge to the government, given the high cost of construction material and related expenses, but one that the government was committed to investing in since housing, besides being a very basic requirement, also holds the key to accelerating the pace of development in Guyana, Jordan stated.

Meanwhile, Minister within the Ministry of Communities with responsibility for housing, Valerie Adams-Patterson, explained that the  Housing Solutions 2017 and Beyond, programme will bring resolution to those persons who form the huge backlog of applications at the Central Housing and Planning (CH&PA) Authority, some of whom applied for their house lots since 1994.

“It is painful to sit and hear the stories of some of our people as they visit my office, as I go out to consultation and meet people. It is sad to look into their eyes and to have them say ‘We do not have house lots,’” the minister said.

Minister Adams-Patterson said she is passionate about the view that the right to adequate housing is a universal right, and committed to providing affordable housing to all Guyanese.

Also addressing the launch were CH&PA’s CEO Lelon Saul, Chairman of the Board, Elsworth Williams and Region Four Chairperson, Genevieve Allen, who pledged to work with the government and the Ministry of Communities towards the vision of ensuring that all Guyanese own a home.

Also present at the ceremony were Minister of Communities Ronald Bulkan, Minister within the Ministry Dawn Hastings-Williams, Minister of Public Infrastructure, David Patterson and Minister of Business, Dominic Gaskin.

Prior to the start of the official ceremony, Ministers Adams-Patterson, Hastings-Williams and Patterson turned the sod to officially launch the programme at Perseverance.

As the programme progresses, several other housing options are to come on board, including condominiums.