Man charged with murder during brawl over filling water bottles 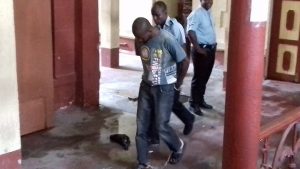 A man was Friday arraigned for an alleged murder that police said stemmed from a brawl over the filling of water bottles.

Charged with the indictable offence is Shelton John Marks is accused of the murder of Mark Ifill on Tuesday, April 25, 2017 at Water Street, Bagotstown, East Bank Demerara.

Investigators were told that Ifill was filling bottles of water along a pathway which leads to the house of the Marks.
Marks had approached Ifill and demanded that he remove from the location and “stop fulling water.” However, Ifill ignored him and continued to fill his many bottles and loaded them into his wheel barrow.

That allegedly enraged the alleged perpetrator who reportedly started a fight with the now dead man.

Bail was refused for Shelton John Marks and he was remanded to prison until his next court appearance on May 18, 2017.